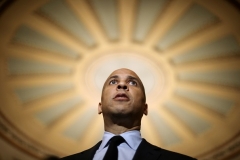 (CNSNews.com) - Sen. Cory Booker (D-N.J.) is drafting a law intended to flag bad actors in police forces across the nation:

"And when you see the horrible, horrific murder of George Floyd, you know the history from which it springs. You know the depth of the pain and anguish, where black people in communities all across this country live in fear of the police," Booker told "State of the Union" with Jake Tapper:

My team right now is currently drafting legislation, obvious legislation, number one, to change Section 242 that governs misconduct for police in this country. That needs to be changed, to create a national police registry for misconduct, which will help us to stop officers who accrue such large actions of misconduct, and then have nothing happen to them.

I'm -- we are drafting legislation around the use of force incidents and how we have to create greater transparency and accountability for them.

We're drafting legislation that bans racial and religious profiling. I could continue. This is not like we don't know what to do, Jake. It's that we have not manifested a collective will to get it done.

We come from a nation that it seems to take these spasms of protest and discord to get people who are comfortable on the sidelines witnessing history, to get them onto the field and began to make history, to make us to be who we say we are, a nation of liberty and justice for all.

And so we know what to do. There are things we can do. We are not helpless. We are not weak. We are strong. But as a guy who always says that you can't lead the people if you don't love the people, we need to be a society of great brotherly and sisterly love, a beloved community. Well, what does love look like in public, as one of my heroes says? It looks like justice. And we have a -- we have steps, concerted steps that we have to take.

And my worry right now, amidst this time of pain and hurt and rage, is that, in a month or two, people will go back to normal. Well, normal -- normal is to see so much of our nation hurting and in pain. And, again, we are one country.

You can no more take one -- a knife in one hand and stab the other arm and think that that's not going to hurt your entire body, than to be a nation right now to have so much environmental injustice, economic injustice, racial injustice, criminal injustice, and not think the entire body is going to suffer. We are all weaker because we have allowed so much injustice to last so long.

And so now it's a time to take this energy and this anger and this focus and keep it, until we actually change laws and systems of accountability that can raise standards in our country.

Booker is a former contender for the Democrat presidential nomination.