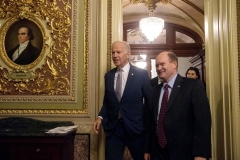 Then-Vice President Joe Biden joins Sen. Chris Coons (D-Del.) at a tribute to Biden in the Capitol in December 2016. (Photo by NICHOLAS KAMM/AFP via Getty Images)

(CNSNews.com) - The Senate on Saturday acquitted Donald Trump of inciting insurrection, but that's not where this should end, politicians of both parties are now saying.

On Sunday, Republican Sen. Lindsey Graham and Democrat Sen. Chris Coons separately called for a 9/11-style commission to examine the attack on the Capitol.

"And a 9/11 Commission is a way to make sure that we secure the Capitol going forward and that we lay bare the record of just how responsible and how abjectly violating of his constitutional oath President Trump really was."

Coons said it would take "months and months" to unearth "all the evidence that can possibly be gotten to through a 9/11-style commission."

He said that's why Senate Democrats decided not to call witnesses in Trump's impeachment trial -- because additional witnesses would have delayed an outcome that was not going to change.

In addition to a 9/11-style commission, Coons said he agrees with calls for a criminal investigation of former President Trump, something Senate Minority Leader Mitch McConnell raised as a possibility following his vote to acquit.

But, George, I'm also focused on moving forward with delivering the urgent pandemic relief, the revitalization and strengthening our economy that President Biden has been focused on since becoming president.

Even during this week of the impeachment trial, President Biden had bipartisan groups of senators over to the White House to talk about pandemic relief, rebuilding infrastructure, restarting our economy.

I think that phase of accountability moves to the courts now, and we in Congress need to move forward with delivering the expanded unemployment checks, the stimulus checks, the reinvestment in our economy that the American people so desperately need and deserve.

'Biden is uniting the American people'

Coons, a close ally of President Joe Biden, noted that Biden has met with a bipartisan group of senators to discuss "an appropriately bold and broad relief package."

Republicans want more targeted relief, meaning a less expensive bill with money going only to those who need it most.

"If they get to a number and a scope that meets President Biden's goals, I think that's a good outcome," Coons said.

"But we in the House and Senate, Democrats have provided a pathway so that, if a month from now, as unemployment checks are on the verge of stopping for 10 million Americans, we can proceed with a Democrat-only bill.

“And from the way he spoke at his inauguration to the actions he's taken in his first couple of weeks, he is showing us what real presidential leadership looks like, in sharp contrast to his predecessor. He ran on unity and I believe he's delivering unity for the American people."