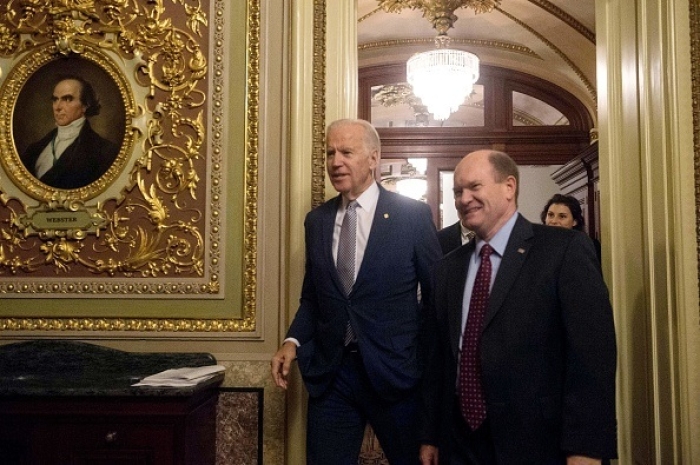 Then-Vice President Joe Biden joins his friend Delaware Chris Coons at a tribute honoring Biden's service as a member of the Senate and as vice president on December 7, 2016. (Photo by NICHOLAS KAMM/AFP via Getty Images)

(CNSNews.com) - Amid whispers in the press that President Biden should not seek a second term, one close Senate ally of the president says yes, he should:

"I'm not speaking on his behalf or announcing a candidacy. I'm just saying that as of now, it's my understanding that the president intends to seek a second term, and I understand why,” Coons responded:

"His leadership on the world stage has been impressive. He's just returned from a successful Summit of the Americas. He's pulled together four critical partners in the Indo-Pacific in a new organization called the Quad, a new partnership with allies.

"And in the face of Russia's brutal invasion, their aggression against Ukraine, President Biden has shown a masterful skill at pulling together the E.U. and NATO in order to push back, in order to support Ukraine's brave resistance to Russian aggression.

"Here at home, his predecessor talked about infrastructure over and over, was never able to get a bill on infrastructure to the floor, and to his desk. President Biden signed into law one of the biggest investments in infrastructure in American history.

"And President Biden and Democrats in the Senate have a plan for how to reduce prescription drug prices, how to tackle health care costs that I remain optimistic we will get done.

"The deficit is coming down. He's got clear plans for how to tackle inflation, and he's helping lead the United States to a position of strength on the world stage. I can understand why he might think running for reelection is a good idea."

Baier also asked Coons about Biden's upcoming visit to Saudi Arabia, which Biden on Sunday tied to "much larger issues" than gas and oil prices.

"Well, the president is going to the GCC (Gulf Cooperation Council)," Coons said.

"This is a summit that's being hosted by the Saudi Kingdom that will allow him a chance at one time in one place to meet with a whole range of heads of state from the Persian Gulf, from the Middle East.

"The president, as you know, has decades of experience in foreign policy, and I trust his firm hand, his leadership, in this moment. We do need to improve the supply of oil and gas to our Western European partners in order to help sustain their support for Ukraine's fierce resistance against Russia's invasion.

"But I think this is another moment where the president may well make significant steps forward in terms of supporting the security of our vital partner, Israel, in the region, and of addressing the real threat to security posed by Iran and Iran's nuclear program.

"So I'm optimistic that this will be another productive step forward on the world stage by one of America's most seasoned foreign policy leaders, President Biden."