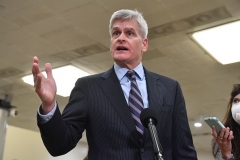 Republican Senator Bill Cassidy of Louisiana talks to the press on the 2nd day of Donald Trump's impeachment trial. (Photo by NICHOLAS KAMM/AFP via Getty Images)

(CNSNews.com) - Sen. Bill Cassidy of Louisiana was one of seven Republicans who voted to convict Donald Trump of inciting insurrection.

In a brief statement afterward, Cassidy tweeted: "Our Constitution and our country is more important than any one person. I voted to convict President Trump because he is guilty."

On Sunday, Cassidy gave a fuller explanation of his decision to once again break ranks with the majority of Senate Republicans. (Cassidy last week joined five other Republicans in voting to proceed with the Senate trial.)

"So, I listened very carefully to all the arguments," Cassidy told ABC's "This Week" with George Stephanopoulos:

But if you describe resurr -- insurrection, as I did, it's an attempt to prevent the peaceful transfer of power, we can see the president for two months after the election promoting that the election was stolen, people still tell me they think Dominion rigged those machines with Hugo Chavez from Venezuela, that is not true, and all the news organizations that promoted that have retracted.

He then scheduled the rally for January 6th, just when the transfer of power was to take place. And he brought together a crowd, but a portion of that was transformed into a mob. And when they went into the Capitol, it was clear that he wished that lawmakers be intimidated. And even after he knew there was violence taking place, he continued to basically sanction the mob being there. And not until later did he actually ask them to leave.

All of that points to a motive and a method. And that is wrong, he should be held accountable.

Cassidy said people are angry now, but as the "facts become more and more out there, if you will, and folks have a chance to look for themselves, more folks will move to where I was."

Cassidy said he is attempting to hold President Trump accountable, "and that is the trust that I have from the people who elected me, and I am very confident that as time passes, people will move to that position."

"I have voted to support and defend the Constitution," he added.

Cassidy agrees with those who say Trump is a waning force in the Republican Party:

We are the party that before COVID had an economy that had record low unemployment for everyone; the disabled, the high school dropout, the veteran, the woman, the Black, the Hispanic, you name it, that is the party of the ideas.

Now, the American people want those ideas but they want a leader who is accountable and a leader who they can trust. I think our leadership will be different going forward but it will still be with those ideas.