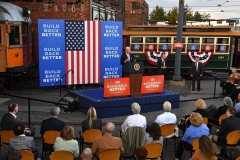 President Joe Biden plugs his leftist agenda in Scranton, Pa., in October, before "Build Back Better" hit the skids in the Senate. (Photo by NICHOLAS KAMM/AFP via Getty Images)

(CNSNews.com) - The Democrats' Build Back Better Act cannot pass the Senate in its current form, but Democrats are determined to "get something done," Sen. Ben Cardin (D-Md.) told "Fox News Sunday.

"There is unanimity in our caucus that we want to get a bill to the president, and we are working to see what that bill will contain," Cardin said:

President Biden is directly involved in these negotiations. We need to deal with the affordability of childcare because it affects our workforce and having workers available for our economy.

There are things that need to get done that shouldn't be partisan. We should be able to get these issues worked out. We are prepared to move, we just need to make sure we have unanimity in our caucus and that's what we're working on, and we will start on that next week when we return.

Host Mike Emanuel asked Cardin if Democrats will scale back the cost and scope of the big-government legislation, or maybe pass pieces of it as stand-alone bills:

"Well, that's a strategy decision that's being negotiated," Cardin said. "We are open to a way to reach the finish line. We want to make it as comprehensive as possible because the needs are just there. We recognize that families need help on affordability, and that's what this is about, making our economy affordable for families. And it will be fully paid for. That is very clear.

"We understand the risks of inflation and we are committed to making sure that we really offset all expenses. So I think, with those parameters, we want to see it as comprehensive as possible, but we need to make sure we have the votes to pass it, so that means it will be different than some of us would like to see."

Cardin said Democrats are aiming for a bill that both progressives and moderates can support: "We've got to find that sweet spot and I think as long as everyone's at the table as we're negotiating, I know President Biden has always included all parts of our caucus in these discussions, I think we can reach that sweet spot.

"Look, a lot of us are going to be disappointed, but we're not going to let perfection be the enemy of getting something done, so we need to get something done. I think we'll be pragmatic about it, but we want to make sure it deals with the issues that we are facing in our communities."

In the evenly divided Senate, all 50 Democrats must vote for BBB if it's going to pass, but Democrat Joe Manchin of West Virginia said he's a "no" vote as the bill stands now.

Nevertheless, Cardin said he thinks Manchin "understands the importance of getting legislation to the president to deal with many of the issues that are in Build Back Better. He doesn't agree with all of them, so let's sit down and find that area where we all can come together for the sake of our country. And all of our states, including west Virginia and Maryland, the citizens will benefit from that."

Cardin said as far as he's concerned, "the worst outcome is inaction, getting nothing done. We've got to get something done."