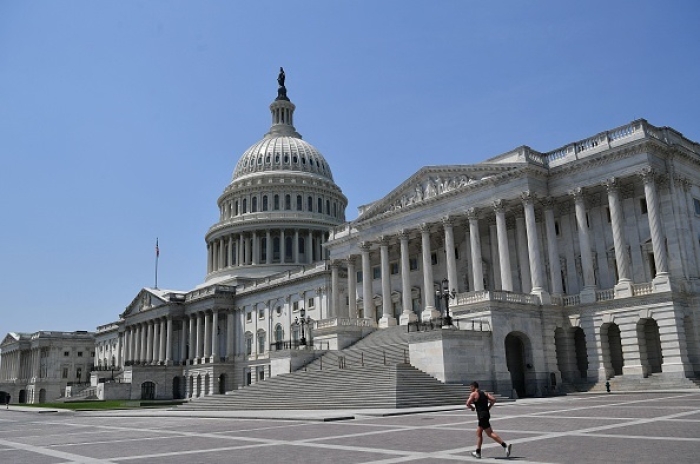 (CNSNews.com) - Sen. Bill Cassidy, a Louisiana Republican, says his Democrat colleague Joe Manchin is fudging the facts about a $400-billion tax-and-spend bill, which Manchin suddenly supports, despite his earlier opposition to the Democrats' massive Build Back Better bill.

Manchin has agreed to vote for a bill that he insists will not raise taxes -- just close loopholes, as he put it on Sunday.

"Yeah, much of what he says is just not true," Cassidy told ABC's "This Week."

"For example, they are raising taxes. According to the Joint Committee of Taxation, taxes will be raised almost $17 billion in the first year on those who are making less than $200,000, and the percent of taxes raised for individuals increases over time for the middle class and the lower income. They're raising taxes on people who make less than $10,000, according to the Joint Committee on Taxation.

"And in terms of lowering the price of fuel, they're going to raise excise tax on the -- every barrel of oil by $17 roughly. That is going to increase the price at the pump, increase other fuel-related costs.

"So much of what they're saying about this bill was not true and those are two examples."

Cassidy said the Schumer-Manchin bill, dubbed the Inflation Reduction Act, "may be deflationary by causing a recession."

"Number two, 50 percent of the taxes on business are on manufacturers. I just spoke to a Louisiana manufacturer last week and he's - he's just like having to increase wages to attract workers. And now we're going to increase his taxes as much as we're going to. Manufacturers can choose to set up in the United States or chose to move to Asia. I think what we're doing is inducing them to move to Asia. You can have a disinflationary program by causing a recession. I think this is going to lead to a worse recession."

Sen. Manchin told "Fox News Sunday" that the $400 billion bill he suddenly endorses does not raise taxes: "So we did not raise taxes," he said. "We've closed loopholes. That's all we did.

I made...sure there was no tax increases in this whatsoever."

"The only thing we have done is basically say that every corporation of a billion dollars of value or greater in America should pay at least 15 percent minimum corporate tax.

"Many people in West Virginia don't -- couldn't believe that corporations aren't paying anything, and some of the largest in the country. And with that being said, the rate was at 35 percent in 2017 when my Republican friends took it to 21 percent. We thought it should stop at 25 percent. It went to 21 percent, a 14 percent savings. You would at least think that they would be paying at least 15 percent. Most businesses and all corporations that I know pay 21 percent. So that's not a tax increase; it's closing a loophole."

Manchin also discussed what the bill does do:

"It gives us a strong fossil energy that's going to produce the cleanest forms of fossil energy in the world. That's carbon reduction, when you're replacing the dirtiest oil right now that's going into the -- into the climate and atmosphere. That's something we can do.

"You're producing in America, we become energy independent, you're going to reduce because of supply. Next of all, we pay $300 billion down on debt, $300 billion, the first time in 25 years, Chuck, that we've ever done this. Next of all, we're reducing $288 billion in drug prices because of what we're doing.

"This is a bill that basically does everything, and if someone says it's not going to reduce inflation, my goodness, we've never done anything like it. We didn't raise taxes.  We've paid down debt. We've done everything, and we've accelerated our permitting processing to where we can get to market quicker."