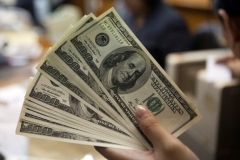 (CNSNews.com) - As part of their Build Back Better plan, Democrats want to see how much money goes into and out of your bank account every year, to make sure you're paying your "fair share" for their green new deal and all their new entitlement programs.

"The Republican Party is not going to allow the IRS to spy on your banking accounts," Sen. John Barrasso (R-Wyo.) told a news conference on Tuesday.

According to the proposal, as outlined by the U.S. Treasury Department, financial institutions would report data on financial accounts the same way employers are required to issue W2 forms showing how much each employee was paid in a given year.

"On this single topic alone, I've gotten more emails and calls in the last three weeks than I have on any other item over the last of the times I've been in the United States Senate," Barrasso said:

So here's what's going on. As a part of what the President is proposing with his reckless tax and spending bill, he wants to give $80 billion of additional money to the Internal Revenue Service.

Janet Yellen wants to use that money, the secretary of Treasury, to hire a whole new army of IRS agents. She has said she wants those agents to have access to your personal bank accounts, your checking accounts, to the point where she said that any check that you would write or any deposit you would make for anything above $600 would have to be reported to the IRS. Their goal, of course, is to squeeze more money out of hardworking taxpayers.

And they want to use that money that they squeeze out of hard-working taxpayers to pay for their big government socialist agenda. Now number one, this is an invasion of privacy of American citizens; and number two, it turns bankers and credit unions into de facto IRS agents, and they don't want any part of it either.

This is the topic that came up repeatedly when I was at the grocery stores in Wyoming this past weekend. The IRS is the most powerful and truly unresponsive or unaccountable agency of government and they have proven they are unable to keep tax records, secure. Proven it. We are not going to allow Joe Biden to give the IRS more power.

We want to stop this in its tracks. I want to be able to tell cowboys in Wyoming that if they make a payment on their pickup truck or buy a saddle for their horse, they're not going to have an IRS agent along for the ride.

As the Treasury Department explains it, banks would not report itemized transactions, such as truck or saddle purchases.

Instead they would report "gross inflows and outflows with a breakdown for physical cash, transactions with a foreign account, and transfers to and from another account with the same owner."

The requirement would apply to all business and personal accounts from financial institutions, including bank, loan, and investment accounts, with the exception of accounts worth $600 or less.

President Biden explained his new tax reporting plan this way in a speech on September 16:

"It would ask just for two pieces of information from the banks of these folks: that amounts — the amounts that come into their bank accounts and what amounts go out of their bank accounts, so that the wealthy can no longer hide what they’re making and they can finally begin to pay their fair share of what they owe.

"That isn’t about raising their taxes," Biden said. "It’s about the super-wealthy finally beginning to pay what they owe — what the existing tax code calls for — just like hardworking Americans do all over this country every tax day."

Biden said the bank account reporting proposal would bring in an estimated $160 billion in taxes that currently go unpaid.

The American Bankers Association says the new reporting requirements "will create unnecessary and expensive burdens for banks and raise the cost of tax preparation for small businesses, but more importantly they raise serious questions about our customers’ right to privacy."