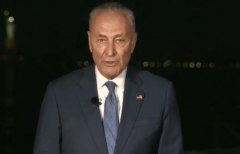 (CNSNews.com) - Is it the job of government to reduce disparities in income and wealth? Senate Minority Leader Chuck Schumer (D-N.Y.) says it is.

Standing in the dark of night, the Statue of Liberty barely visible behind him, Schumer told his fellow Democrats Tuesday night that Joe Biden "will be a great president, but if we're going to win this battle for soul of our nation, Joe can't do it alone."

"Democrats must take back the Senate," Schumer said, to bring "bold and dramatic change to our country."

"Let me tell you some of the things we'd do," Schumer said:

We will make health care affordable for all. We'll undo the vicious inequality of income and wealth that has plagued America for far too long, and we'll take strong, decisive action to combat climate change and save the planet.

We will protect voting rights, fight systemic racism in the criminal justice system and in our economy; and restore a Supreme Court that looks out for people, not corporations.

We'll rebuild our infrastructure and make sure every home, from inner city to rural America, has broadband. We will save the post office, and once and for defeat COVID 19, this evil disease.

And beckoned by the lady behind us, we will reform our immigration system, so immigrants yearning to breathe free will at last become American citizens.

Together, we can reignite the hope once felt by millions of men and women, huddled masses on creaking ships, who glimpsed this mighty woman with her torch, knowing they could build a better life here in America.

And out of this long national nightmare, America will finally awaken to a brighter future and a new day.

Schumer didn't say how Democrats will "undo" the wealth gap or "defeat COVID-19," for example.

But President Trump has warned repeatedly that Democrats will sock Americans with big tax increases to fund their priorities.

Appearing on "Late Night with Stephen Colbert" Tuesday, Sen. Elizabeth Warren (D-Mass.) also stressed the need to elect Joe Biden and return the Senate to Democrat control. And for months, she has plugged tax increases as the solution to many problems.

She explained to Colbert what Biden means when he says, "Build back better."

It means investing in working families. So he said he's going to invest in child care, in cancelling student loan debt, that he's going to expand Social Security and better care for seniors, including seniors that are cared for at home.

He says he's going to make the rich pay their fair share – it’s going to be painful for you, Stephen -- but that's what's going to happen. That he's going to insist on corporations having some accountability. These are the kinds of plans that I don't think are just about Democrats. I think these are the plans that all of America wants.

Warren said the country faces a double crisis right now -- COVID-19 and "an economy that is literally breaking apart."

"There is no better way to strengthen this economy than to do it from the grass-roots up. So it's short term. We need to reinstate the expanded unemployment insurance, PPP for the small businesses. But it's also long term. It is making those investments and relieving our kids from student loan debt, and investing in child care, in pre-K. These are the things that both put money into the economy but also let the economy work better.

"So, if you want to see an economy that does better for everyone, then you make those investments going forward. And that's what I think we ought to be doing. And I think a lot of folks think that. So that's why I'm looking forward to November 3."

Trump, for his part, says his administration’s tax cuts and deregulation are responsible for bringing companies back to the U.S. The Trump economy was thriving until the coronavirus pandemic brought it down.