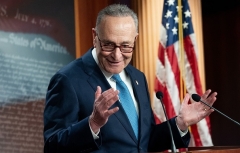 "We will find a way to do big, bold change. And our caucus will sit down and figure it out, but failure is not an option. We must create change," he said. That change includes statehood for D.C. and Puerto Rico.

Schumer appeared on PoliticsNation with Al Sharpton, who asked Schumer: "Do you believe you can work with Senator McConnell to get things done in the Senate or will you constantly be forced to fight against him?"

"Well, Reverend, we have one goal -- big, bold change in America," Schumer responded:

We would like the Republicans to join us in some of those things at least, and maybe they will. But we are going to get that change no matter what.

We cannot -- there is such a demand, three huge issues we have  to do -- climate, huge issue faced in the country; racial and economic inequality, which has gotten worse, not better, which demands change and justice in a big, bold way; and improving our democracy -- making D.C. a state.

Automatic voter registration, getting rid of Citizens United. All the things embodied in HR-1, which the House passed and McConnell would block up.  But we're going to fight to pass it in the Senate. That's why we made it S-1.

So climate, racial inequality, economic inequality, and democracy, improving our democracy, letting people vote much more easily; dealing with D.C. and Puerto Rican statehood -- dealing with bad money that flows in; the John Lewis Act, undoing the horrible decisions the court made which defanged the Voting Rights Act.  And that's why Republicans have gotten away with taking people's votes -- the right to vote away for the last four years.

Sharpton asked Schumer, "What about the filibuster?" Schumer has not ruled out getting rid of the Senate rule that requires 60 votes to cut off debate.

"Well, as I said, we will find a way to do big, bold change," Schumer said. "And our caucus will sit down and figure it out, but failure is not an option. We must create change."

Sharpton followed up, asking Schumer again, "Can we get rid of the filibuster or is that something the caucus has to debate?"

"Yeah," Schumer replied, "we'll put our heads together and decide how the best way of getting change is. But change we must."