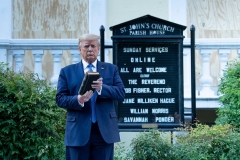 Democrats and even some Republicans have criticized President Donald Trump for his June 1 photo op at St. John's Church, which had been torched by rioters the night before. (Photo by BRENDAN SMIALOWSKI/AFP via Getty Images)

(CNSNews.com) - Outraged Senate Democrats are demanding speedy passage of law-enforcement reform legislation in the wake of George Floyd's asphyxiation death under the knee of a Minneapolis policeman.

And they also want to condemn President Trump for his Monday evening photo op in front of the historic St. John's Church, which rioters tried to burn down on Sunday night.

"We must answer the president for what he did last night," Senate Minority Leader Chuck Schumer (D-N.Y.) told a Tuesday afternoon news conference:

And that's why in about an hour and a half, we will be putting on the floor a unanimous consent resolution condemning the president's actions that has the support of every single member of our Democratic Caucus. This resolution condemns the president for what he did. I know that the overwhelming majority of Americans will agree with us.

The resolution says that the constitutional rights of Americans to peaceably assemble, exercise freedom of speech and petition the government for redress of grievances must be respected. That violence and looting are unlawful, unacceptable, and contrary to the purpose of peaceful protest, and that the Congress condemns the president of the United States for ordering federal officers to use gas and rubber bullets against Americans who were peacefully protesting in Lafayette Square in Washington, D.C., on the night of June 1, thereby violating the constitutional rights of those peaceful protesters.

We will--we will not allow the president to take away the First Amendment rights of Americans.

Schumer also promised that Senate Democrats will not wait to take action on law-enforcement reform:

"We're going to confront these issues right now," he said, under the leadership of Sens. Cory Booker (N.J.) and Kamala Harris (Calif.), who appeared with Schumer at the news conference.

"We're going to listen to experts and our constituents who face these challenges on a daily basis, and we will put together a strong, bold legislative package very soon, under the guidance and leadership of the people here."

Schumer is demanding that Senate Majority Leader Mitch McConnell commit to putting law-enforcement reform legislation on the floor before July 4.

And what would that legislation look like? Sen. Kamala Harris offered some hints:

"The reality of it is that the life of a black person in America historically, and even most recently with Mr. Floyd, has never been treated as fully human. And it is time that we come to terms with the fact that America has never fully addressed the systemic racism that has existed in our country."

Harris said protesters understand that the promise of equal justice under the law has never been fulfilled:

There is not a black man I know, be he a relative, a friend or a coworker or colleague who has not been the subject of some form of racial discrimination at the hands of law enforcement, not one I know. And I am talking about people at every level of life, including people who graduated Harvard and Stanford, and you name it.

Harris called the "policing issue" the "tip of the iceberg."

"Underneath it is also these issues of long-standing racial disparities based on housing, based on education, based on public health.

“But right now, this is the moment in time to address the issue of policing. And so the package of bills that Senator Booker and I, and so many of our colleagues are pulling together is specifically to address that, because it must be addressed."