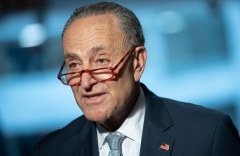 (CNSNews.com) - Senate Minority Leader Chuck Schumer (D-N.Y.) on Sunday accused Republican leader Mitch  McConnell of "jamming through the hearings on Amy Coney Barrett, even though three senators have COVID, even though he has said it’s not safe for the Senate to meet in session, but it’s OK to have the hearings."

McConnell tweeted on Saturday: "Senate floor proceedings will be postponed until October 19th. The @SenJudiciary confirmation hearings for Judge Barrett’s nomination to the Supreme Court will convene on October 12th as scheduled by Chairman Graham."

In an accompanying statement, McConnell said the Senate’s floor schedule “will not interrupt the thorough, fair, and historically supported confirmation process previously laid out by Chairman Graham.”

McConnell also noted that since May, the Judiciary Committee “has operated flawlessly through a hybrid method,” in which some senators appear in person at hearings and others participate remotely.

“Certainly all Republican members of the committee will participate in these important hearings,” McConnell added.

And the idea of having virtual hearings where no one is with the witness for the highest court in the land for a life appointment that would have such effect on people's lives makes no sense. A virtual hearing is virtually no hearing at all.

You need be with the witness and have direct cross-questions and back and forth with them.

And we all know the nominee affects people's health care and their protection with pre-existing conditions; stands for preserving or eliminating a woman's right to choose; stands for keeping worker rights strong, voter rights strong, LGBTQ rights strong. So for Mitch McConnell to go ahead with the hearing endangers the safety of not only senators but of staff who work diligently on the Hill, and they out to be delayed.

There is no reason on God's green earth  why they shouldn't be delayed other than an effort to rush a witness through in an inadequate hearing where people can't even see the witness face to face. So we are demanding today, along with millions of Americans and many, many groups, that the hearings be postponed.

Schumer has promised to use "every tool in the toolbox" to delay Barrett's confirmation hearings "and not have the votes occur." He mentioned "public pressure" on senators as one tactic.

As of Monday morning, three U.S. senators had been diagnosed with COVID: Sens. Thom Tillis (R-N.C.), Matt Lee (R-Utah) -- both members of the Judiciary Committee; and Ron Johnson (R-Wis.).