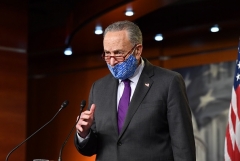 (CNSNews.com) - "Everyone, regardless of party, should want President-elect Biden to be successful in vanquishing the pandemic," Senate Minority Leader Chuck Schumer (D-N.Y.) told a news conference on Tuesday.

Of course, Democrats never expressed such a sentiment about President Donald Trump, berating him at every turn for his alleged “mishandling” of a virus previously unknown to mankind.

Schumer on Tuesday called it "outrageous" that the Trump administration has refused to provide Biden with intelligence briefings or the COVID vaccine distribution plan.

In fact, Schumer even refused to credit Trump for his successful push to accelerate the COVID vaccine development.

“The test is out on the Trump administration, because their main--their main goal is to distribute--get the--the vaccine distributed fairly and equitably, and so far, they've behaved poorly on that.”

He then moved on to another question.

Schumer and other Democrats complain that delaying the start of an "orderly transition," while the Trump administration is still challenging some election results, is harming national security and Americans' health.

"Everywhere you go in this country, it's awful," Schumer said.

"So the election is over, and the country is ready, eager to move that--to get us to move so that we can begin healing the process. The country wants us to come together and get something done to deal with this COVID crisis. But Senate Republicans have continued denying the election results and they are holding America back."

Schumer said Americans want lawmakers to "put politics aside and get something done."

After the election, Americans expect us to put aside our partisan differences and do the job they sent us to do. So how does Senate Republicans respond? Instead of working to pull the country back together so that we can fight our common enemy, COVID-19, Senate Republicans continue to push debunked conspiracy theories the denying reality, poisoning the well of our democracy.

The Republicans shenanigans include indulging the president's temper tantrum and it endangers our national security, as you'll hear about. It makes it harder for us to fight COVID.

Everyone, regardless of party, should want President-elect Biden to be successful in vanquishing the pandemic. But delaying the start of an orderly transition makes that a lot harder to do. It's outrageous that the Trump administration has refused to provide the president-elect with high level intelligence briefings or brief the transition on the vaccine distribution plan.

These are essential to ensuring that our country remains safe and the COVID vaccine is distributed quickly and effectively and efficiently. That's how we can get our country back to normal.