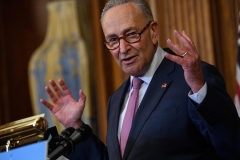 (CNSNews.com) - Senate Minority Leader Chuck Schumer (D-N.Y.) said Democrats are "using all the tactics we can" to slow down the confirmation of Amy Coney Barrett to the Supreme Court.

And if the 2020 election is a clean sweep for Democrats, Schumer indicated they will do what they can to render the Republican minority powerless for a long time.

MSNBC's Joy Reid asked Schumer on Wednesday if Democrats would add D.C. and Puerto Rico as states and end the Senate filibuster.

"I would -- believe me, on D.C. and Puerto Rico -- particularly if Puerto Rico votes for it, D.C. already has voted for it and wants it -- would love to make them states," Schumer said.

"And as for the filibuster, I'm not busting my chops to become majority leader to do very little or nothing. We are going to get a whole lot done, and as I've said, everything, everything is on the table."

At a news conference earlier on Tuesday, Schumer was asked about ending the filibuster if voters make him Senate Majority Leader. Sen. Mazie Hirono (D-Hawaii) jumped in to answer for him:

"My position is seen as the leader's position on filibuster," Hirono said. "You know, there was a time when I did not support a filibuster change, because a filibuster is supposed to protect the voice of the minorities. We're in the minority. I don't think our voices are being protected, so I'm open to that discussion. But it won't happen unless the Democrats take back the Senate."

Although he did not comment directly on the filibuster at the news conference, Schumer did say (again) that "Everything will be on the table. Nothing will be off the table."

"And there are a variety of different ways, and we are exploring all of them. It is one of our highest priorities, and we are going to get something very strong and bold done," Schumer promised.

At Tuesday's debate in Cleveland, Democrat Joe Biden refused to say if he would pack the Supreme Court to give liberals a majority if the Republican-led Senate confirms Judge Amy Coney Barrett. Nor will Biden release a list of his potential Supreme Court nominees, as President Trump did in 2016.

Sen. Josh Hawley (R-Mo.) told Fox News on Wednesday that court-packing "would be a huge mistake."

"I mean, the truth is Republicans won those elections, and court packing is all about undoing the results of those elections, It's basically saying we don't like what voters did in those elections, so we'll just add more justices to drown out those results until we can get a court we can control. That would be a huge mistake."