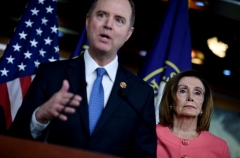 (CNSNews.com) - Rep. Adam Schiff (D-Calif.), a member of the House select committee examining the January 6 attack on the U.S. Capitol, says the committee "has engaged lawyers" to try to secure the testimony of the four Trump associates who have been subpoenaed.

"I can't go into the communications," Schiff told CNN on Tuesday, "but we have engaged with lawyers that are representing them to try to secure their testimony. But also to make it very clear that those who don't cooperate with our committee are going to be the subject of criminal contempt. We will vote on it in the House, at the appropriate time, and we will refer to the Justice Department for prosecution. So we're not fooling around. We expect people to fulfill their lawful duties.

“If there are legitimate questions that are raised, we'll answer them, respond to them, but we want to make sure that we provide all this information to the American people. And these four witnesses in particular are really in a position to know exactly what the president was doing, what the response was like, why we weren't better prepared, and the role of the administration in this attack on the U.S. Capitol.”

Schiff noted that there's a new attorney general and a “new” Justice Department "dedicated to the principle that no one is above the law." That means Bannon, who is refusing to testify, "is in a completely different situation now," Schiff said.

He said the committee expects the DOJ under Merrick Garland to "act with expedition" to enforce committee subpoenas. "And at the end of the day, it will be a test of our justice system, and our democracy, and whether we're living up to that principle that no one is above the law."

Schiff said criminal referrals "will come very fast if people refuse to cooperate and have no basis for their refusal."

Schiff had harsh words for his Republican colleagues, some of whom urged him to get out of the House chamber for his own safety before the mob spotted him:

It was -- I think a harrowing moment for all of us. There were people breaking down the door, it wouldn't be long after this that Ashli Babbitt would be shot climbing through the glass to try to break in. And I kind of hung back. I think everyone was reacting differently. And there was a real scrum to try to get out the doors, and the Capitol Police were telling us you need to get out, you need to get out.

And so I was waiting, and I -- I have to say, my first reaction when the Republicans came up to me to say you can't let them see you was to be touched they were concerned about my safety. But my next reaction was to think, you know, if you all hadn't been lying about the election, let alone lying about me for four years, I wouldn't need to be worried about my security, none of us would need to be worried about it.

And in that sense, what angered me the most I think about that day were these insurrectionists in suits and ties who were still, even after the bloody insurrection, even after all the shattered glass and the death of that day, were back on House floor trying to overturn the election.

John Berman, the host of "New Day," said, "You're saying insurrectionists in suits and ties. You're talking about the Republicans in Congress?"

"I am," Schiff said. "Because unlike those people climbing outside the building, they knew it was a lie. The true believers were out there attacking the building. But inside the chamber, my Republican colleagues know it is a big lie..."

Schiff singled out House Minority Leader Kevin McCarthy as "absolutely" an insurrectionist in a suit and tie.

McCarthy, of course, could well be the next speaker of the House if Republicans prevail in the 2022 midterm election.

Schiff is making the rounds of friendly corporate media to plug his new book, "Midnight in Washington: How we almost lost our democracy and still could."