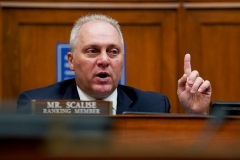 "What they don't want you to know was what else was happening in the Capitol today, Laura."

Today we had votes in the House committees all across the Capitol today for things like, for example, to make sure that we could put more money in place for increasing vaccines. They've--every Democrat voted that amendment down.

We had an amendment to ensure that illegals wouldn't get priority over Americans. Every Democrat opposed that.

Taxpayer funding for abortion. Today there were votes in Congress. Every Democrat voted against it. You can wonder why they want the side-show of impeachment going on in the Senate so that you're not paying attention to those things.

Right now, you're hearing out of the White House they're floating the idea, Laura, in the White House of shutting down the state of Florida while Joe Biden is encouraging and opening up the southern border.

Scalise called it "insane" that Biden's open-borders policies have prompted "super-spreader" caravans to head to the United States.

In addition to opposing Republican amendments, Democrats are "killing all the energy jobs," Scalise continued:

"They're, you know, they're shutting down schools and destroying the future for these young kids. The science clearly says do it. They keep saying follow the science until their own scientists -- from the CDC director sitting in front of the CDC logo during a press conference -- said you can safely reopen schools and you saw the White House's reaction.

"They said oh no, they don't speak for us. Wait a minute, what about the science? Of course, you can safely reopen schools. This is -- this is what's going on, Laura, that they don't want you to know about."

On the second Trump impeachment, Scalise -- who survived a shooting by a crazed Bernie Sanders supporter -- said he doesn't know of anyone on either side who was OK with what happened on January 6:

“I called it out myself. So many others have, too. The difference is, during the summer when we were calling out that violence that was happening in all these cities with Antifa -- with all the Democrat officials encouraging them to do it and saying they would bail people out if they were arrested being part of those mobs -- I didn't hear that outrage by the Democrats.

“And so, you know, you can't have this double standard. And they're wasting so much time right now on this impeachment that we all know how it's going to end. It's not going to end up with a conviction..."