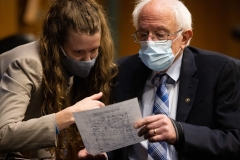 Sen. Bernie Sanders confers with a congressional staffer at a hearing in Washington. (Photo by GRAEME JENNINGS/POOL/AFP via Getty Images)

(CNSNews.com) - Sen. Bernie Sanders (I-Vt.), chairman of the Budget Committee, said he expects the bipartisan infrastructure bill to pass the Senate by the end of the week, and "then we will immediately turn to what we call the reconciliation bill, a bill which I think will have extraordinarily positive impact on working families."

The reconciliation bill, which has only Democrat support, is more important than the bipartisan bill, Sanders told CNN's Wolf Blitzer on Monday:

I'm a former mayor, so I know a little bit about roads and sidewalks and bridges and all that stuff. It is terribly important. We have an enormous amount of work to be done in that area. But human infrastructure, the needs of working family -- families and our children and our elderly, that's actually more important.

So, both of these bills have got to go forward together. And when we do that, we will create many, many good-paying jobs.

And one of the things I'm really excited about, as we go forward in transforming our energy system, and trying to reverse climate change, we're going to create a civilian climate corps, which will provide hundreds of thousands of good-paying jobs for young people, and give them the opportunity to lead the effort in trying to save this planet. So, there's just a lot that we have to do. Now is the time to do it.

And I will tell you that you got a lot of special interests, the drug companies -- we're going to lower the cost of the prescription drugs -- the health care industry, the fossil fuel industry. You name the big money interests, they're going to try to defeat us.

But it's important that we hang in there together, and that we pass this bill.

Sanders outlined some of what's in the massive reconciliation bill that creates new entitlement programs.

He mentioned the extension of the child tax credit which sends $300 a month to "working families." The bill also includes "comprehensive child care," expanded Medicare, paid family and medical leave, affordable housing, and the transformation of the U.S. energy system away from fossil fuel.

It may even include immigration reform.

"And when we do all of those things, Wolf, we're going to create millions of good-paying jobs," Sanders said.

Sanders admitted that getting the $3.5 trillion reconciliation bill passed will be "extremely complicated," because so-called "moderate" Democrats are leery of the huge price tag, while leftist Democrats say the bill doesn't provide enough of a social safety net.

Sanders said he looks forward "to the White House playing an active role in terms of making sure that we have the votes that we need to pass reconciliation.”

Unlike, obviously, the bipartisan bill, the reconciliation bill, which is really transformative -- it begins to address the reality that, for decades, Congress has paid a whole lot of attention to the rich and the powerful and campaign contributors, and ignored the needs of the working class in this country.

So, having said that, and demanding that the wealthy start paying their fair share of taxes, we're not going to get any Republican support. So we have zero Democratic votes to spare. But, at the end of the day, the House and the Senate are going to have to come together to do something which is overwhelmingly popular among working families.

People are sick and tired of seeing the rich get richer and everybody else struggling. They want action. And we're going to give them what I think is long overdue.