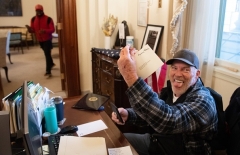 Richard Barnett, a Trump supporter, holds a piece of mail as he sits inside the office of House Speaker Nancy Pelosi on January 6, 2021. (Photo by SAUL LOEB/AFP via Getty Images)

(CNSNews.com) - Rep. Jim McGovern (D-Mass.), the chairman of the House Rules Committee, opened another impeachment debate on Wednesday morning, describing the violent events of January 6, when a mob attacked the U.S. Capitol.

He said he saw "evil" in the eyes of the "traitors" who were "acting under the orders of Donald Trump."

McGovern noted that the effort to impeach Trump for a second time was taking place "at an actual crime scene."

This was not a protest, this was an insurrection. This was a well-organized attack on our country that was incited by Donald Trump. Domestic terrorists broke into the United States Capitol that day, and it's a miracle more people didn't die.

As my colleagues and I were being evacuated to safety, I never, ever will forget what I saw when I looked into the eyes of those attackers right in the Speaker's lobby there. I saw evil, Mr. Speaker. Our country came under attack, not from a foreign nation but from within.

McGovern indicated that now is not the time to "move on," as some Republicans have urged:

"But to gloss over it over would be an abdication of our duty. Others on the Republican side have talked about unity, but we can't have unity without truth and without accountability, and I'm not about to be lectured by people who just voted to overturn the results of a free and fair election.

“America was attacked, and we must respond even when the cause of this violence resides at 1600 Pennsylvania Avenue.”

McGovern said our nation and our freedom is in danger every moment Trump remains in office. "The damage this building sustained can be repaired, Mr. Speaker. But if we don't hold Donald Trump accountable, the damage done to our nation could be irreversible.”