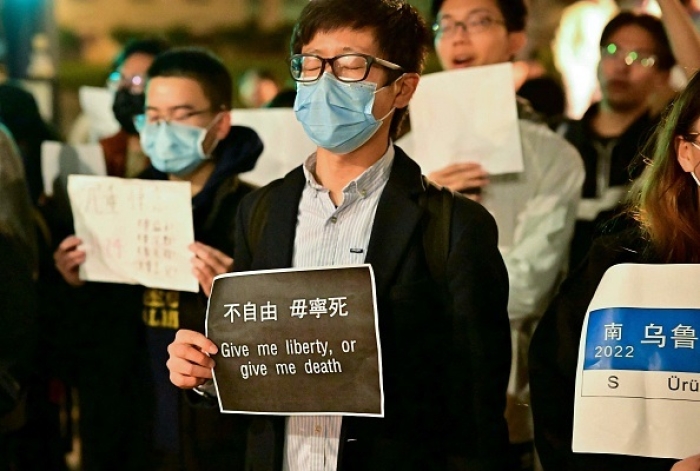 (CNSNews.com) - Sen. Marco Rubio (R-Fla.) says the Biden White House gave a "weak" response to Chinese protests over COVID lockdowns because something similar, although not as drastic, was done here not so long ago.

In response to a reporter's question about the protests on Monday, administration spokesman John Kirby said the Biden White House does not support China's strict COVID lockdown policy:

"Obviously there are people in China that have concerns about that, and they're protesting that, and we believe they should be able to do that peacefully," Kirby said.

"I think it's very weak," Rubio said on Monday, "and I think part of it is the self-awareness -- that there are people in the party of the president, the Democratic Party, who are governors, mayors, people in different parts of the country who actually wanted people arrested, and some cases did; wanted people fined and businesses closed, who had people removed from airplanes, who had all kinds of things that were going on and all kinds of restrictions.

"Now, nothing compares to what the Chinese are willing to do to someone, so I'm not making that comparison. But I think he's self-aware, that he can't go too far in criticizing some of these restrictions because it wasn't so long ago in this very country that there were governors and mayors and even federal officials who wanted to see very strict enforcement of COVID regulations at a time when, frankly, we had what was in many parts of the country COVID-zero-type policies.

"Nothing like China, of course, but basically in the same spirit," Rubio said.

Rubio said the protesters aren't so different from the rest of us:

"And every country in the world where that's been tried, people have rebelled. Even in a totalitarian state like China, we're now seeing that play out. And I think these things are going to continue, and I think the reaction of the Chinese government should be a wake-up call to the world.

“These people want to be the most powerful country in the world. If they do that to their own people, what would they do to you?"