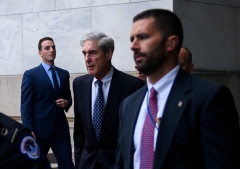 (CNSNews.com) - Special Counsel Robert Mueller's team of investigators was overwhelmingly comprised of Democrats, something President Trump repeatedly complained about, but that did not trouble former Deputy Attorney General Rod Rosestein, who appointed Mueller to look into alleged Trump-Russia "collusion" in 2017.

"I'm fairly confident that the political bias did not enter into that investigation," Rosenstein told the Senate Judiciary Committee on Wednesday.

Sen. Mike Lee (R-Utah) asked Rosenstein: "Before you became the acting attorney general in this context, didn't you, at some point, get a sense for the politicization with the FBI, at the top level of the FBI, even beyond Jim Comey?"

"No," Rosenstein said. "You didn't have any sense that there was a targeting of a presidential candidate, and later, someone who became the president of the United States?" Lee asked.

"I did not have that impression," Rosenstein said.

"What was the legal basis for appointing Mueller? And didn't you become concerned at some point about the composition of Mueller's staff? Let's take, for example, Mr. Weissmann. Mr. Weissmann is now fundraising for Joe Biden, as is his right. Previously, he was an advocate of the Hillary Clinton campaign. Did that bother you, that you had known Democratic operatives, overwhelmingly Democratic-leaning people who were part of this team?"

"It would have been preferable, Senator, to have a more politically diverse group, but if they followed the rules, their political ideology wouldn't matter," Rosenstein said.

"But, Senator," Rosenstein said, I had Bob Mueller in charge of this. And based upon that and based upon my conversation with him, I'm fairly confident that the political bias did not enter into that investigation."

Lee also asked Rosenstein if he was ever asked by a member of Congress to launch a criminal investigation into President Trump:

"I don't believe so," he responded.