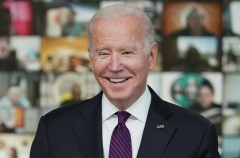 (CNSNews.com) - Sen. Mitt Romney (R-Utah) says the Biden administration never reached out to him or other Republicans on voting reforms that Republicans might have been able to support.

Instead, Biden went to Georgia last week and said Republicans who don't support Democrat rules for state-run elections are comparable to long-dead racists and segregationists.

"Sadly, this election reform bill that the president has been pushing, I never got a call on that from the White House," Romney told "Meet the Press" with Chuck Todd:

There was no negotiation, bringing in Republicans and Democrats together to try and come up with something that would meet bipartisan interests. Sure, we can work together on almost every issue where there's common ground.

I would note on this, that on the bill they put together, that they want a real dramatic change, which is they feel that instead of elections being run at the state level, they should really be managed and run at the federal level.

And recognize, the Founders didn't have that vision in mind. They didn't want an autocrat to be able to pull a lever in one place and change all the election laws. Instead, they spread that out over 50 states, I think, in part to keep autocracy from finding its root here in this country.

So, we're going to -- we can work together. And I think it's important to reform the Electoral Count Act to do so.

Romney noted that a group of 12 senators, both Republicans and Democrats, are now working on the Electoral Count Act, with the goal of making it harder for elected officials in the states to challenge or interfere with congressional certification of the vote.

Romney noted that the nation is "severely divided" and that Biden vowed to unite the country. But instead, Biden continues to divide the country, as evidenced by his angry speech on electoral reform in Georgia:

Obviously, as you pointed out in the last segment, his comments in Georgia did not suggest he's trying to pull us back together again. He's got to recognize that when he was elected, people were not looking for him to transform America. They were looking to get back to normal, to stop the crazy.

And it seems like we're continuing to see the kinds of policy and promotions that are not accepted by the American people.

I mean, people are 7 percent poorer now because of Biden inflation. Gasoline prices are, what, 50 percent higher than they were when he took office. The border is a mess. COVID was resurgent, but he didn't have a place the tests people needed to keep themselves safe.

And then, of course, there was a disaster in Afghanistan. Russia's now threatening Ukraine. Things are not going well. And the president needs to stop and reset and say what is it he's trying to accomplish. And if it's to try and transform America, he is not going to unite us.

Bringing us together means finding a way to work on a bipartisan basis. He had one success, the infrastructure bill, and that was done by Republicans and Democrats in the Senate working together. Build on that kind of success.

Romney said Republicans are willing to work with Biden "on issues that we care very deeply about."

He mentioned "family security,” education, health care and infrastructure. “We care about immigration. These are things we can do together."

Romney said Biden knows what the Senate is like, "and how you have to work on a bipartisan basis." Yet Biden is now urging Democrats to abolish the filibuster rule, which would suppress the voice of the political minority.

"That's not the right way to get things done in America and it's not the way to unite America. Uniting America finds a pathway in bringing people together and working on a collaborative basis."

As for the leftist Democrat argument that Republican states are trying to suppress or subvert the vote, Romney noted that existing federal law already bars discrimination in voting. "So, we have laws to prevent discrimination based upon race, and that should be the case,” he said:

“And no one is saying that, oh, New York has discriminatory practices," Romney said. "No, New York's practices are more stringent, more difficult to vote there than Georgia. So, this is clearly a political play to appeal to a base in the Democratic Party and an effort to really work at a bipartisan basis hasn't happened yet.”