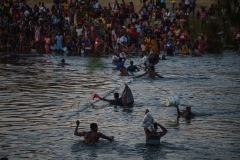 Haitian migrants flood across the US-Mexico border on September 19, 2021. (Photo by PAUL RATJE/AFP via Getty Images)

That includes children who are here illegally, he said.

"So under the bill that is being proposed and considered by Congress, we'll be paying the illegal immigrant $300 per month for each and every one of their children that obtain such a number.

“So a family of four who would come here illegally would receive as much as $1,200 per month in checks from the U.S. government, well, of course, well above the wage -- the average wage throughout major parts of Latin America."

Romney asked Homeland Security Secretary Alejandro Mayorkas, "Do you think that this provision, which would allow the children of those that have come here illegally to receive monthly payments would represent an unfortunate and damaging pull factor that would draw people -- more and more people into our country illegally?"

"Well, clearly, if you can get paid $300 per child, even though the child is here illegally and you're here illegally, that's going to encourage people to come here. It's also going to represent a major expense for our government to pay the children of those that are here illegally at $300 per month. One, it's expensive; and two, it creates a greater draw to come to the country."

People who come to the country illegally can apply for an ITIN, which are issued regardless of immigration status, because both resident and nonresident aliens may have taxable income. "ITINs do not serve any purpose other than federal tax reporting," the IRS website says. They are issued to people who are not eligible for a Social Security number.

The IRS website says ITINs do not authorize work in the U.S.; provide eligibility for Social Security benefits; or qualify a dependent for Earned Income Tax Credit Purposes. But Romney told the committee the Democrats' $3.5 trillion reconciliation bill the children of illegal aliens may also get an ITIN.