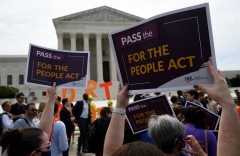 Democrats and their allies are hellbent on passing a voting bill that would relax safeguards, including voter ID, making it easier to vote -- and to cheat. (Photo by OLIVIER DOULIERY/AFP via Getty Images)

(CNSNews.com) - A voting overhaul bill -- an attempt by Democrats to dictate federal rules for elections that are run by the states -- is expected to come up for a vote next week.

“S.1 is a bad bill, filled with bad ideas, and I’ve been crystal clear about opposing it from the very beginning," Senate Minority Leader Mitch McConnell (R-Ky.) said on Thursday. “It’s a massive takeover of our electoral system with a fill-in-the-blank rationale. Nobody is fooled. And next week, the Senate will reject it.”

Later, Senate Republicans gathered at the microphone to denounce the bill, one by one.

"I've taken a look at all of these new state laws. None of them are designed to suppress the vote," McConnell said. "There's no rational basis for the federal government trying to take over all of America's elections."

No voting legislation is likely to pass unless Manchin votes for it -- or unless he votes to scrap the filibuster, which he has so far refused to do.

Manchin would make Election Day a public holiday, mandate 15 consecutive days of early voting and allow automatic registration through the DMV, among many other proposals.

Manchin's bill also would require states to send absentee ballots to eligible voters before an election if the voter is not able to vote in person during early voting or on Election Day...and allow civil penalty for failure."

"It still turns the Federal Election Commission from a judge into a prosecutor by taking away the 3-3 balance and making it 3-2, Democratic," McConnell said. "And what is of extraordinarily dubious constitutionality -- would remove redistricting from state legislatures and hand it over to computers. Equally unacceptable, totally inappropriate."

McConnell said he thinks all Republicans would oppose the revised version, if it surfaces on the Senate floor.

Sen. John Barrasso (D-Wyo.) said Democrats' real aim with voting "rights" legislation is to make themselves the permanent majority party by making it easier to cheat in elections.

It allows for ballot harvesting, allowing people, unsupervised, to go and collect hundreds if not thousands of ballots and then decide what they're going to do with them.

And then, number 3, is it mandates taxpayers to fund elections by putting money, taxpayer dollars, into campaigns of people they may be completely against.

It's an 800-page bill. What I outlined there is just the tip of the iceberg. The more people find out about this, the less they like it. It is radical, it's extreme, it is dangerous, it is scary.