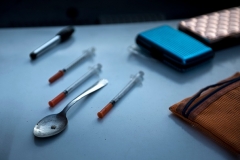 Paraphernalia for smoking and injecting drugs is confiscated during a police search in Huntington, West Virginia. (Photo by BRENDAN SMIALOWSKI/AFP via Getty Images)

(CNSNews.com) - Several Republican senators are floating a bill called the CRACK Act, which stands for "Cutting Off Rampant Access to Crack Kits."

The bill introduced by Sens. Tim Scott (S.C.) and Marco Rubio (Fla.) would amend Section 2706 of the Democrats' $1.9-trillion American Rescue Plan Act of 2021 to prohibit any funds from directly or indirectly purchasing, supplying, or distributing crack pipes or similar drug paraphernalia.

The bill simply reads: "Amounts made available under this section may not be used to procure, supply, or distribute pipes, cylindrical objects, or other paraphernalia that can be used to smoke, inhale, or ingest narcotics."

Notably, the bill does not bar the funding of syringes used to inject illegal drugs, which -- according to Biden administration officials -- the "harm reduction" kits do contain.

In a joint statement issued earlier this week, Health and Human Services Secretary Xavier Becerra and Rahul Gupta, director of the White House Office of National Drug Control Policy, said: "The Administration is focused on a comprehensive strategy to stop the spread of drugs and curb addiction, including prioritizing the use of proven harm reduction strategies like providing naloxone, fentanyl test strips, and clean syringes..."

The statement also said, "[N]o federal funding will be used directly or through subsequent reimbursement of grantees to put pipes in safe smoking kits."

But in its December 8, 2021 announcement of the "Harm Reduction Grant Opportunity," the Substance Abuse and Mental Health Services Administration -- part of HHS -- did not explicitly rule out the provision of crack pipes.

It did, however, include "the provision of sterile syringes" among the "evidence-based services" it seeks to provide.

Here is the relevant paragraph of SAMHSA's grant funding announcement:

In fact, SAMSHA devotes a section of its website to "harm reduction," calling it  “a key pillar in the multi-faceted Health and Human Services' Overdose Prevention Strategy."

And in this "harm reduction" section, SAMSHA does indeed list "safe smoking supplies" as a way to "reduce sharing of substance use equipment, improve physical health, reduce the spread of infectious diseases."

Sens. Scott and Rubio said it appears the Biden administration changed its mind after word got out that the harm reduction kits might include crack pipes.

“The thought of taxpayer money funding crack pipe distributions could not be more ludicrous,” said Senator Scott. “But after a year of ludicrous policies and conflicting statements from the Biden administration, Republicans are leaving nothing up to chance. I’m proud to join my colleagues in introducing this bill to ensure our federal government does not fuel dangerous drug addictions at the expense of American taxpayers.”

According to the federal Centers for Disease Control and Prevention, syringe/needle exchange programs "provide access to sterile needles and syringes, facilitate safe disposal of used syringes" and refer drug abusers to treatment programs and other health services.

"Some states have passed laws specifically legalizing SSPs (Syringe Services Programs) because of their life-saving potential," CDC said. "Decisions about use of SSPs as part of prevention programs are made at the state and local levels."

CDC noted that the Federal Consolidated Appropriations Act of 2016 included language that gave states and local communities meeting certain criteria the opportunity to use federal funds provided through the Department of Health and Human Services to support certain components of SSPs, with the exception of provision of needles, syringes, or other equipment used solely for the purposes of illicit drug use."

That has now changed, as HHS -- through the American Rescue Plan -- intends to spend $30-million funding programs that do provide "clean syringes," as noted above.