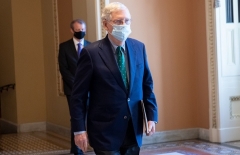 Senate Majority Leader Mitch McConnell (R-Ky.) wears a mask, as do all lawmakers, to protect himself and others from COVID-19. (Photo by SAUL LOEB/AFP via Getty Images)

(CNSNews.com) - House Speaker Nancy Pelosi (D-Calif.) on Tuesday rolled out "The Heroes Act," a $3-trillion bill that "focuses on three pillars," she said: "opening our economy safely and soon" (testing); "honoring our heroes" (money for state and local governments); "and then putting much-needed money into the pockets of the American people."

Senate Republicans said the Democrat bill is dead on arrival:

"The House of Representatives is reporting out today an 1,815-page bill at the cost of $3 trillion and a laundry list of agenda items that have nothing to do with the coronavirus, but are part of their more permanent long-term agenda," Sen. John Thune (R-S.D.) told a news conference on Tuesday:

And I think what people need to know is that this is nothing more than a messaging exercise by House Democrats.

They didn't have any input from Republicans and I don't think a lot of input from some Democrats in the House of Representatives. So, it wasn't a sincere effort, or meaningful effort, to address a crisis that is being faced by the American people, but it clearly is an effort to try and create talking points for the 2020 election.

It's not going anywhere, and we all know that, but I hope that, as the Senate continues to look at these issues and examine what the next steps need to be, we will be working in a bipartisan way and with the White House to make sure, as I said before, we're addressing the very serious needs of the American people when it becomes both to the health emergency and the economic emergency that they're experiencing right now.

Sen. John Barrasso (R-Wyo.) told the same news conference that while the Senate is back at work, "the House is still at home."

But Nancy Pelosi has been very active, coming out with this over 1,800-page bill, spending over $3 trillion. It's big, it's bloated, it's partisan, and it's a payoff to her liberal constituencies. What it isn't going to do is focus on the CARES Act, to take a look at what's working, why it's working, and what we can do to make it work even better.

So, let me state the obvious, what Nancy Pelosi is proposing will never pass the Senate. Her efforts of so-called election reform and bailing out large state pension plans, trillions of dollars, will never become law.

Republicans know what we're focused on. We're focused on helping American families. We want to do it in a way that is targeted and temporary, and specifically focuses on the coronavirus and the implications of it.

That means, focusing on people's healthcare, on testing, on vaccines, on treatment, and focusing on the liability reform that is necessary to help small businesses open again so, they don't have to live in fear of a lawsuit, in addition to their efforts of trying to open their businesses and open our states and open our schools and our universities.

Senate Majority Leader Mitch McConnell (R-Ky.) has called for a "pause" in spending, to assess the "effectiveness" of the massive relief bills passed so far.

And so, we're going to insist on doing narrowly targeted legislation, if and when we do legislate again, and we may well, that addresses the problems. The needs, and not the aspirations of the Democratic majority in the House.

Pelosi on Tuesday told Jim Cramer, host of CNBC’s "Mad Money," that in addition to money for state and local governments, direct payments to individuals, and money for testing, food programs and the rest, the Democrats' bill includes "strong OSHA regulation, not guidelines, but mandates as to what should happen in the workplace."

"That's everybody's best protection, the worker and the employer, should the worker get sick," Pelosi said.

Sen. McConnell has said liability protection for businesses is the best way to go, and he said no bill will emerge from the Senate without it.