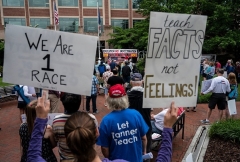 (CNSNews.com) - Pointing to an increase in "harassment, intimidation and threats of violence against school board members, teachers and workers in our nation’s public schools," Attorney General Merrick Garland on Monday announced a plan to crack down on parents who object to the leftist political indoctrination of their children.

The Justice Department announced it will create a task force "to determine how federal enforcement tools can be used to prosecute these crimes, and ways to assist state, Tribal, territorial and local law enforcement where threats of violence may not constitute federal crimes."

Several Republican lawmakers are condemning what they call a "dangerous overreach" in "going after parents."

"Obviously, every state has laws on the books for criminalizing violence or criminal threats," Sen. Tom Cotton (R-Ark.) told Fox News on Tuesday:

This is a dangerous overreach by the Biden administration to sic the feds on parents who simply want to play a role in their kids' education.

As you pointed out, (Sen.) Krysten Sinema had a crazy liberal follow her into a bathroom to protest her over the weekend. What was Joe Biden's response to that, a Democratic senator of his own party? He laughed at it and said it's all just part of the process.

Apparently parents going to a school board meeting to complain about what their kids are learning or that they have to wear masks and getting applause from their fellow parents makes them all domestic terrorists for whom we should use the Patriot Act and sic the feds on them. It's a dangerous overreach.

Cotton said parents will now think twice about going before their school boards: "But that's as American as anything -- going to your local elected leaders and voicing your concerns, especially when it comes to educating your kids."

Well, you can imagine, Tucker, some things FBI agents could be doing, like maybe going to the border where we have an unprecedented surge in crime, of illegal immigration, of drug smuggling. But no, instead we're going to go after parents.

Can I just say, you know that you've lost the argument when you're sending FBI agents to try and silence voting, taxpaying parents, trying to silence them. I mean, I can't think of an instance in American history where anything like this has happened before. It's another first for Joe Biden, and it's a bad one...

...What we're seeing is, Tucker, anytime that this administration doesn't like opposition, anytime it doesn't like a political point of view, they try to silence it, and they are willing to use federal law enforcement power to do it.

But to use it against parents, I mean, things are just getting really crazy when they're using it against parents of children who, what, they line up at a school board meeting, they want to express their concern -- they elect these people, by the way. Parents elect the school board, and now they can't even speak without being investigated? It is insane.

Remember what the (Virginia) gubernatorial candidate Terry McAuliffe said? That parents should have no say in their children's education...But now they want to intimidate a parent from coming in and questioning about what is being taught to their children?

And this is all happening because after COVID, we've had these Zoom classes. Parents are now becoming more aware of what's being said in their classroom, and they're becoming upset by it. And what's the answer from the Biden administration? To silence you -- to nationalize elementary school. This is wrong. This is against what America believes fundamentally.

McCarthy noted that the states run the public education system: "You should not silence parents, you should welcome parents into the classroom. They should have more say."