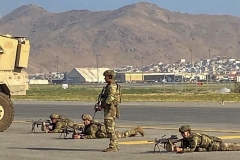 US soldiers take up their positions around the airport in Kabul on August 16, 2021, as thousands of people mobbed the city's airport trying to flee the group's feared hardline brand of Islamist rule. (Photo by SHAKIB RAHMANI/AFP via Getty Images)

(CNSNews.com) - Sen. Ben Sasse (R-Neb.), a member of the Senate intelligence committee, issued a statement on Sunday saying that both Donald Trump and Joe Biden "deliberately decided to lose" the 20-year war in Afghanistan.

“The unmitigated disaster in Afghanistan — the shameful, Saigon-like abandonment of Kabul, the brutalization of Afghan women, and the slaughter of our allies — is the predictable outcome of the Trump-Biden doctrine of weakness," Sasse wrote:

History must be clear about this: American troops didn’t lose this war — Donald Trump and Joe Biden deliberately decided to lose.

Politicians lied: America’s options were never simply this disgraceful withdrawal or an endless occupation force of 100,000 troops (we haven’t had that in Afghanistan in a decade). America’s leaders didn’t tell the truth that our small, forward-deployed force of a few thousand was the backbone of intelligence and special forces’ successful work to decapitate terror organizations.

The looming defeat will badly hurt American intelligence and give jihadis a safe haven in Afghanistan, again. America will regret this. Our allies will trust us less and our adversaries fear us less. China is already exploiting this latest instance of American retreat. We need a long-term national security strategy.

(In a second statement issued on Monday, Sasse slammed President Biden for hiding out: “While Afghanistan falls to jihadi militants, our Afghan allies are on the verge of slaughter, and America gets humiliated, President Biden hides out at Camp David. It’s unacceptable. The mission at this point ought to be simple: bolster American troops and firepower until we can get flights running around the clock. The Taliban must not dictate when every last American, our courageous Afghan partners, and their families are off the tarmac.”)

‘This is not ending the war’

Today, as we watch, the Taliban, for example, release prisoners across Afghanistan, there's very real concern that there are not just fighters in those prisons who will join the battle in Afghanistan, but the terrorist groups globally will in fact be fed new soldiers in their war on terror from those prisons.

This is -- it's a devastating set of circumstances but the de-legitimization of the Afghan government, the notion in the Trump administration, the suggestion that at one point they were saying, "We're going to invite the Taliban to Camp David." They --

"Yes," Cheney continued. "I mean, they -- this disaster certainly began -- and, look, the notion of we're going to end endless war, that campaign slogan, what we're watching right now in Afghanistan is what happens when America withdraws from the world.

"So everybody who has been saying, 'America needs to withdraw. America needs to retreat,' we are getting a devastating, catastrophic real-time lesson in what that means."

Cheney said the unfolding catastrophe "did not have to happen."

Cheney said it wouldn't have taken much to maintain the "status quo, 2,500 to 3,500 forces on the ground, conducting counter-terrorism and counter-intelligence operations."

Removing all troops, a process Trump initiated and Biden continued, does not end the war, Cheney said:

"This is not ending the war. What this is doing actually is perpetuating it," she said:

So everybody -- the Rand Paul, Donald Trump, Mike Pompeo, Joe Biden view of the world here is fundamentally dangerous and irresponsible and wrong.

Even if the American people agree it's time to end the war and bring the troops home, leaders "have an obligation" to tell people the truth, Cheney said:

"And we have an obligation to explain what's necessary. There's one question, one question that matters when it comes to Afghanistan or any other deployment of U.S. Forces, and that question is, 'What does American security require?'

“And if American security requires that our enemies can't establish safe havens to attack us again, then our leaders across both parties have the responsibility to explain to the American people why we need to keep the deployment of forces on the ground,” Cheney said.

"This has been an epic failure across the board, one we're going to pay for, for years to come."