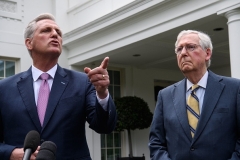 Senate Minority Leader Mitch McConnell and House Minority Leader Kevin McCarthy speaks to the press, following their meeting with President Biden and Democrat congressional leaders at the White House on May 12, 2021. (Photo by NICHOLAS KAMM/AFP via Getty Images)

(CNSNews.com) - Congressional Republican leaders Mitch McConnell and Kevin McCarthy came away from a White House meeting with President Joe Biden on Wednesday, optimistic about striking a deal on infrastructure, as long as it does not include tax hikes, as Biden has proposed.

"Clearly, Senate Republicans are not interested in revisiting the 2017 tax bill," Minority Leader McConnell said. "I think the president and vice president understand that. Beyond that, we're interested in trying to get an outcome. And I think the first step is, obviously, to define what infrastructure is, the definition of it. And we all, I think, all agreed to work on that together."

Minority Leader McCarthy agreed: ""I think there's a place that we can find bipartisanship. And it's one thing I brought up to the president. We first have to start with the definition of what is infrastructure. That's not home health. That's roads, bridges, highways, airports, broadband, those are the places we could find common ground and work together."

A reporter noted that Republicans are refusing tax increases while Democrats are ruling out user fees:

But you won't find any Republican that's going to go raise taxes. I think that's the worst thing you could do in this economy when you watch inflation. Your gas is going up. Remember gas price today, national gas price has not been this high since President Biden was vice president. You're watching food costs go up. You're watching housing costs, lumber costs, there is inflation in everywhere you look. Cars have not moved this high month over month to 10 percent.

So raising taxes would be the biggest mistake you could make. Remember the economy we had when we lowered taxes, the 3.5 percent unemployment. You had everybody having opportunity, regardless of where you are in America, some of the great--best employment we have. So that--that--that, to us, is a nonstarter.

What we walked into the room with, where can we find agreement? And I felt that was productive. I felt all of us as leader and the president and the vice president sitting down saying, let's first decide what is the definition of infrastructure. If we can all decide that, then we can work on what the need is and how to--and what we need to spend. That was productive. And I felt, coming out, that's where we were ending up.

Yeah. We're--we're not interested in reopening the 2017 tax bill. We both made that clear to the president. That's our red line. We believe that in February of 2020, we had the best economy we've had 50 years. We believe that was a major reason for it. And so from my perspective, this discussion about the way forward on infrastructure will not include revisiting the 2017 tax bill.