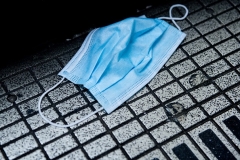 (CNSNews.com) - The House of Representatives voted 218-210 on Wednesday to kill a Republican resolution directing the House attending physician to update mask-wearing guidance for lawmakers and their staffs, consistent with the CDC's new rules.

House Speaker Nancy Pelosi has said she will not lift the mask mandate that applies to the House floor until all members are vaccinated.

So far this week, several Republicans -- Reps. Brian Mast of Florida, Mariannette Miller-Meeks of Iowa, Beth Van Duyne of Texas, and Ralph Norman of South Carolina -- have been fined $500 for refusing to wear masks despite an initial warning to do so.

They face fines of $2,500 the next time.  Several other Republicans have received first-time warnings for not wearing masks.

"I'm not putting another mask on," he told "Fox & Friends" on Thursday.

Norman said the mask requirement is a power play by Pelosi: "She craves power and she uses it to try to, you know, spank us into doing things. Brian Mast is the one that initially started it, and it's time for everybody to take the mask off. And enough is enough."

Norman said Democrats always talk about following the science, but they are ignoring the latest CDC guidelines that say fully vaccinated people don't need to wear masks indoors or out, in most circumstances, because they're highly unlikely to get COVID -- and if they do, they are likely to be asymptomatic and not contagious.

Norman noted that the mask requirement applies to the House floor, "where the cameras are. Outside, nobody wears it," he said.

Norman also pointed to Speaker Pelosi's flouting of mask rules at the height of the pandemic, when she went maskless to a private hair appointment in San Francisco. "And the lady that was fixing her hair could have spread a disease. She ought to pay fine. I'm going to issue a citizen's order for her to pay a fine," Norman said.

Norman said if lawmakers don't need to wear a mask when they're not on the House floor, why should they wear one at all?

"We're still having to vote in shifts where you supposedly social distance, but it's just a show. And it's a scare tactic that Ms. Pelosi has continually done. We are just tired of it and, yeah, we are -- I'm not putting another mask on."

Meanwhile, "this country is burning," Norman said. "We have issues with the border. We have got issues with gas. And here she is doing this? Concentrate on things that will help the country. You have got to fight her and this is the way we are doing it."

Norman added that he doubts any Democrat will be fined.