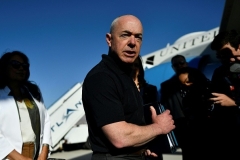 (CNSNews.com) - "Secretary Mayorkas is a threat to the sovereignty and security of our nation," Rep. Andy Biggs (R-Ariz.) said on Tuesday, as he filed articles of impeachment against the Homeland Security Secretary.

"As a result of his actions and policies, America is more in danger today than when he began serving as Secretary. He is willfully refusing to maintain operational control of the border and is encouraging aliens to enter our country illegally," Biggs said in a statement.

"Under his direction, DHS is systematically releasing COVID-19 positive aliens into our communities, subjecting the American people to unnecessary and avoidable risks. Secretary Mayorkas is failing to faithfully uphold his oath of office and is presiding over a reckless abandonment of border security and immigration enforcement, at the expense of the U.S. Constitution and the security of the United States."

In the Democrat controlled House, the attempt to impeach Alejandro Mayorkas is unlikely to go anywhere, but it does serve to highlight the crisis in border communities, Biggs told One America News Network:

Look, there are Democrats that...cannot run in districts that are being overrun by the crisis at the border. So you've got people in Texas who are Democrats, they have to own up to it. But it's also being spread throughout the entire country, so if you've got a bunch of opioid deaths, you've got to acknowledge that this guy's policies have helped create that crisis in your own communities.

"So we're hoping anyways that we can pull some of those people over and compel Nancy Pelosi just to do the moral thing and let us have the hearings on this thing and get this thing going.

In July, Mayorkas issued a statement describing the U.S. strategy on migration from Central America this way:

“The Biden-Harris Administration has outlined a comprehensive strategy to address the root causes leading to irregular migration from Central America and restore safe, orderly, and humane migration in the Americas...The Department of Homeland Security looks forward to supporting these initiatives by working with our regional partners, NGOs, and international organizations to improve security, governance, human rights, and economic conditions in the region as we continue our critical work to build safe, orderly, humane, and lawful pathways for migration.”

Fixing conditions in the region will take years, if it happens at all.

The Biden administration apparently has no near-term plan to stop the immigration surge that began in  earnest with Biden's presidency and his presumed leniency on illegal immigration.

The Biden administration has refused to complete the Trump-era border wall, some of which is already paid for; and the administration has ended the remain-in-Mexico policy that contributed to a significant reduction in illegal border crossings during Trump's presidency.