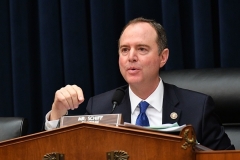 (CNSNews.com) - Rep. Adam Schiff (D-Calif.) on Wednesday picked up the line tossed out by former Vice President Joe Biden on Tuesday -- that recent developments in the Michael Flynn case are mere distractions.

Schiff, an early and dedicated supporter of the Trump impeachment, told MSNBC's Andrea Mitchell on Wednesday, "This is the president's effort to distract from the fact that, under his watch, we have now lost 80,000 American lives and our economy is in the worst shape it's been since the Great Depression."

Mitchell's question is noteworthy as well for its partisan flavor. Here's how she framed the argument and how Schiff responded:

At the end of the interview, Mitchell asked Schiff:

I also want to ask you about President Obama and now, in a separate instance, maybe a separate instance, the acting DNI, Ric Grenell, going after Democrats going, after the Obama administration, resurrecting the whole unmasking issue, the president accusing former President Obama of the greatest crime ever. What's going on here? There's also a "Wall Street Journal" editorial against you as well, against the Adam Schiff transcripts, as they put it.

Well, what's going on is, this is the president's effort to distract from the fact that, under his watch, we have now lost 80,000 American lives and our economy is in the worst shape it's been since the Great Depression.

This is what this is about. They want to distract attention. They want to create some kind of a counter-narrative that, no, it was actually Obama committing crimes, not Donald Trump. It was all the Obama administration figures. It was Adam Schiff.

But the American people see through this. They are focused right now on making sure that they can stay healthy, that they can put bread on the table. That's their priority, even if it isn't the president's.

And that's where the interview ended.

The Wall Street Journal Editorial Board on May 12 wrote: "Americans expect that politicians will lie, but sometimes the examples are so brazen that they deserve special notice. Newly released Congressional testimony shows that Adam Schiff spread falsehoods shamelessly about Russia and Donald Trump for three years even as his own committee gathered contrary evidence."

Mitchell’s interview with Schiff happened just hours before Acting DNI Grenell released the names of 16 Obama administration officials who requested the unmasking of Gen. Flynn’s name between November 2016 and January 31, 2017.

Also See:
Biden Says Flynn Case 'Is All About Diverting Attention' From the 'Real Crisis'