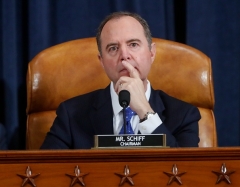 (CNSNews.com) - Rep.  Adam Schiff (D-Calif.), one of President Trump's most vocal congressional critics, says Trump's refusal to concede the election to Joe Biden before the recounts and legal challenges are over is a "body blow to our democracy."

You know, you can't really put anything past this president. I do have confidence that the Pentagon isn't going to go along with a military coup. And so, you know, I hope and pray that confidence is not misplaced, but I do believe that.

Nonetheless, the president is going to do whatever he can to cling to power. That's what autocrats do. He has shown every inclination to do so. And, you know, as you underscored earlier, this is not only so crippling of our democracy, and basically creates a group of people going into the next administration around the country who feel that the Biden presidency is somehow less than legitimate because the last president was claiming fraud, but it sends the message to other would-be autocrats around the world that this is how they should behave.

But Ali, I have confidence that our military isn't going to participate in a coup, and no matter who they try to stack the Pentagon with, that the leadership of the Pentagon is not going to go along with that.

Schiff slammed both Trump and his Republican supporters for placing the country in a "period of real vulnerability" during the "transition." Media outlets called the race for Biden before all the votes were counted, and states have not yet certified the results, some of which are in dispute.

"It's not just that the president refuses to concede, although that is a body blow to our democracy," Schiff said.

"But Donald Trump is punishing enemies by removing them from top positions in the Pentagon, rewarding people who have either no experience or exactly the wrong experience, and are merely politically partisan actors to these top positions. They may make decisions in these waning weeks of the administration that put the incoming administration in a foreign policy crisis. So it couldn't be more debilitating."

Schiff said Trump "couldn't be doing all this -- he couldn't  have broken down so many of our norms and democratic institutions over the last four years, you couldn't be behaving the way he is today, if there weren't leaders in the Republican Party, in Congress and elsewhere, going along with him.

"And this is how a democracy is smothered. It doesn't always die with a shot in the back. Sometimes it dies over a course of slow suffocation. And it is absolutely inexcusable what these enablers are doing."