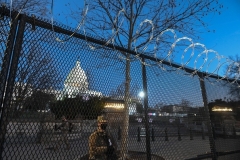 National Guard troops stand behind a security fence topped by concertina wire surrounding the grounds of the U.S. Capitol. (Photo by ROBERTO SCHMIDT/AFP via Getty Images)

Turner sits on both the House Intelligence and Armed Services Committees.

Although he cannot share confidential intelligence information, "I can tell you what my personal opinion and my belief is," Turner said:

This is absolutely unnecessary. And the American public know it. When -- in 9/11, when the Capitol itself was a target, we didn't go to a wall and razor wire around -- around the Capitol.

This is absolutely being done by Nancy Pelosi. Remember, this is a woman who said that walls are immoral to protect the American public and our border. And now we have this wall all the way around the Capitol.

I believe it's part of their narrative of fear. They want to project fear of the American public, and even -- as you know, we have metal detectors now going to the House floor to vote -- fear of even their other members of Congress.

Turner noted that metal detectors have been installed to screen people going onto the House floor:

"And, again, you have statements by the Speaker and statements by other members of the Democratic leadership saying that there are members that are afraid of other Republican members.

"This is all part of perpetuating that culture of fear against the American public, against Republicans, and certainly against those who supported Donald Trump."

Speaking of Donald Trump, Turner complained that President Joe Biden is not only overturning the Trump agenda that gave us such a strong economy before COVID hit -- Biden also is implementing policies that 60 percent of the American public opposes -- including opening the border, "attacking" U.S. energy production, making overtures to China and Iran, and "turning upside-down our Middle East policy."

"All of these are issues that people are very concerned about," Turner said.