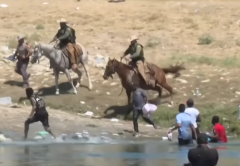 (CNSNews.com) - "I'm pissed. I'm unhappy. And I'm not just unhappy with the cowboys who were running down Haitians and using their reins to whip them. I'm unhappy with the (Biden) administration,” Rep. Maxine Waters (D-Calif.) told a news conference Wednesday on Capitol Hill.

“We are following the Trump policy,” Waters continued: “He (Trump) is the one that does not follow the Constitution and would not allow those seeking refuge to be able to petition to get into the country.

“What the hell are we doing here?” she asked:

“What we witnessed takes us back hundreds of years. What we witnessed was worse than what we witnessed in slavery. Cowboys with their reins, again, whipping black people, Haitians into the water where they're scrambling and falling down, and all they're trying to do is escape from violence in their country.”

Eight members of the Congressional Black Caucus took their outrage directly to the White House on Wednesday, meeting with Biden adviser Susan Rice, the chief of staff to Vice President Kamala Harris and members of the Biden national security team.

Congressional Black Caucus Chair Rep. Joyce Beatty (D-Ohio) told the news conference that "we filled the room, and let me just say, we were not bashful."

Beatty said the CBC delegation is demanding that the CBP agents who chased down Haitians "like they were cattle and goats” be fired, for starters.

She said the CBC has a list of demands, including a "full investigation," and an end to deportation flights that are taking people back to Haiti when they haven't lived there for years. Many of the Haitians flooding across the border into Del Rio, Texas had relocated to South America.

‘They’re trying to take us back to slavery days’

Both Waters and Beatty noted that Haiti is a poor country:

"I've been working with Haitians for 30 years,” Waters said.

"And so yes, we're here and we're organized, and we're saying to the president and everybody else, you've got to stop this madness. And I want to know, in the first place, who's paying these cowboys to do this work? They've got to be gotten rid of, they've got to be stopped. It cannot go on.”

Waters urged reporters to "write the story -- tell the story about what is going on.

“And let people know that they're trying to take us back to slavery days and worse than that. And the children who are unfortunate to be in this situation must be allowed into the United States immediately. Not tomorrow, not next week, not next month, but immediately!”

"People are jumping to conclusions way too fast, on what took place,” he said.