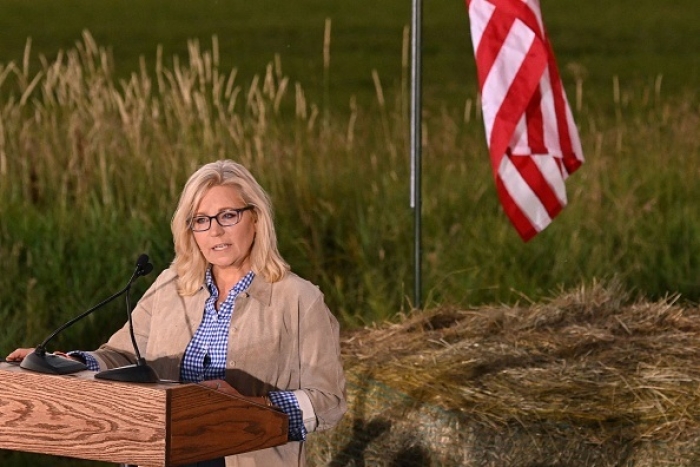 Representative Liz Cheney (R-Wyo.) hints at her political future in her concession speech in Jackson, Wyoming on August 16, 2022. (Photo by PATRICK T. FALLON/AFP via Getty Images)

(CNSNews.com) - Rep. Liz Cheney (R-Wyo.) lost her primary election to Republican Harriet Hageman by a wide margin Tuesday, getting only about 30 percent of the vote to Hageman's 66 percent.

But in her concession speech, as she thanked her team, Cheney told them, "our work is far from over."

Cheney noted that Abraham Lincoln was defeated in Senate and House elections before winning the presidency. "Lincoln ultimately prevailed," she said. "He saved our union and he defined our obligation as Americans for all of history."

After quoting Lincoln's remarks at Gettysburg, Cheney said, "Today our highest duty is to preserve our nation and its blessings to ensure that freedom will not perish, to protect the very foundations of this constitutional republic. Never in our nation's 246 years have we seen what we saw on January 6..."

Cheney noted that she won her primary two years ago with 73 percent of the vote: “I could easily have done the same again,” she said.

Toward the end of her speech, she hinted that her political future is not over: "This primary election is over. But now the real work begins."

Cheney is rumored to be mulling a run for president, and in her speech, she mentioned not only Abraham Lincoln but also General Ulysses S Grant, who also became president.

As she concluded her speech, Cheney said, "We must be very clear about the threat we face and about what is required to defeat it. I have said since January 6 that I will do whatever it takes to ensure Donald Trump is never again anywhere near the Oval Office. And I mean it.

"This is a fight for all of us together. I'm a conservative Republican," Cheney said. She's also one of two anti-Trump Republicans joining Democrats on their one-sided and politically motivated "select committee" investigating the events of January 6.

"I believe deeply in the principals and the ideals on which my party was founded. I love its history and I love what our party has stood for. But I love my country more.

“So I ask you tonight to join me as we leave here, let us resolve that we will stand together -- Republicans, Democrats and Independents against those who would destroy our Republic. They are angry and they are determined.

“But they have not seen anything like the power of Americans, united in defense of our Constitution and committed to the cause of freedom. There is no greater power on this earth. And with God's help, we will prevail."