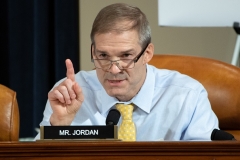 Rep. Jim Jordan (R-Ohio) is ranking member of the House Oversight and Government Reform Committee and also sits on the House Judiciary Committee. (Photo by SAUL LOEB/POOL/AFP via Getty Images)

(CNSNews.com) - On January 6, a joint session of Congress will meet at 1 p.m. to open and count the Electoral College votes and formally declare the winner of the 2020 election.

But under federal law, after listing the votes, "the President of the Senate shall call for objections, if any. Every objection shall be made in writing, and shall state clearly and concisely, and without argument, the ground thereof, and shall be signed by at least one Senator and one Member of the House of Representatives."

All these Democrats who keep saying, oh, we can't look into this, nothing to see here. Well, 77 percent of 75 million think there's something to see here, and we owe it to them to let the process play out.

We'll see what happens in the hearing that Senator Johnson has scheduled for this week. But what's wrong with letting this process play out?

For four years, the Democrats went after President Trump. Why not let us have a few weeks to let the constitutional process play out, so we can get answers for the American people?

A simple majority vote in both the Senate and the House is required for any objection to a state’s electoral results to stand. Because the House is controlled by Democrats, that certainly would not happen.

On Wednesday of this week, the Senate Homeland Security Committee will hold a hearing to examine "irregularities" in the 2020 election:

"Well, this is an unsustainable state of affairs in America, when we have got a large percentage of the American population not believing the results of an election was legitimate," Johnson told Bartiromo on Sunday morning.

"We have had to live with that for four years, because the Democrats never recognized the legitimacy of President Trump. And now we see all these irregularities. The American people deserve answers.

So, I'm really not bringing a bias to this thing," Johnson said. "We need to get to the bottom of this. So, we're going to examine the irregularities. What we can explain, we will take that off the table. But if things are unexplained, we need to further investigate, and the American people deserve the truth and the answers."

The Electoral College meets today to certify the election. The Constitution requires the president to take the oath of office on January 20th.