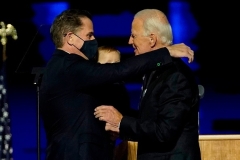 (CNSNews.com) - Newly revealed text messages and emails from Hunter Biden's laptop show that Hunter complained to his daughter about paying his father's bills.

"[I]t sure looks like Joe Biden was involved," Rep. Jim Jordan said in reaction to the latest report.

According to an April 9 report in The New York Post:

Hunter Biden’s access to lucrative financial opportunities also came with expectations — including kicking back as much as 50% of his earnings to his dad, text messages on his old laptop show.

“I hope you all can do what I did and pay for everything for this entire family for 30 years,” Hunter Biden groused to daughter Naomi in January 2019. “It’s really hard. But don’t worry, unlike pop, I won’t make you give me half your salary.” Pop is Joe Biden.

The laptop — infamously abandoned at a Delaware repair shop in April 2019 — does not contain any direct evidence of such money transfers, but does show that Hunter was routinely on the hook for his father’s household expenses while Joe Biden was vice president.

The expenses are spelled out in an email to Hunter from business partner Eric Schwerin from June 5, 2010, entitled “JRB Bills.” They concerned the upkeep of Joe Biden’s palatial lakefront home in the wealthy Greenville enclave of Wilmington, Del. JRB are President Biden’s initials.

"One, it sure looks like Joe Biden was involved," Jordan said:

"This was a family operation, including his uncle, as I said before. Second, remember what Joe Biden said in the debates 18 months ago. He said he didn't do anything wrong, and Hunter wasn't taking money from interests, business interests with connections to China.

"There are 4.8 million reasons why that statement Joe Biden made was not accurate, because we know he took $4.8 million from CEFC, the Chinese energy company. So, yes, this is -- this ties in the entire family.

"The thing that bothers me the most, though, Maria, is the conspiracy. The left always tries to -- always says, oh, there's these right-wing conspiracies. The real conspiracy here was the Democrats, big tech, big media keeping this story from the American people just days before the most important election we have, an election for president of the United States, election for who's going to be the commander in chief.

"And you have a family involved with all kinds of foreign business interests. And we don't get to hear that story.

"And maybe the worst of it all was what 51 former intelligence officials did. That letter they wrote where they said this has all the earmarks of a Russian disinformation campaign, that letter became the basis for big tech and big media to suppress this story and keep it from we, the people, in the run-up to our most important election.

"That's why we sent a letter to these 51 guys. We want to know who they were talking to, how they came to this conclusion, how they put that letter together, because that was the basis for the conspiracy that kept information from the voters right up before the presidential election."

Jordan said when 51 former intelligence officials issue a statement dismissing the Hunter Biden story as Russian disinformation, "you're thinking, wow, these are -- these are guys who are supposed to be in the know. They were in the know when they were in the government. And so there's added weight to that. But, when they mislead us, that makes it all the more wrong.

"And that's why we got to get to the bottom of this, because it's happened more than once now. And it is not supposed to be that way in our great country."

Bartiromo noted that in October 2020, she asked John Ratcliffe, the former director of national intelligence, about the claim of "disinformation" by 51 former intelligence analysts.

Ratcliffe said it wasn't true: "Let me be clear," he told Bartiromo: "The intelligence community doesn't believe that, because there's no intelligence that supports that. And we have shared no intelligence with Chairman Schiff or any other member of Congress that Hunter Biden's laptop is part of some Russian disinformation campaign."

"[T]he arrival on the US political scene of emails purportedly belonging to Vice President Biden’s son Hunter, much of it related to his time serving on the Board of the Ukrainian gas company Burisma, has all the classic earmarks of a Russian information operation.

"We want to emphasize that we do not know if the emails, provided to the New York Post by President Trump’s personal attorney Rudy Giuliani, are genuine or not and that we do not have evidence of Russian involvement -- just that our experience makes us deeply suspicious that the Russian government played a significant role in this case.

"If we are right, this is Russia trying to influence how Americans vote in this election, and we believe strongly that Americans need to be aware of this.

"There are a number of factors that make us suspicious of Russian involvement..."

You can read their full letter here.

Jordan, currently the ranking member of the House Judiciary Committee, said the suppression of the Hunter Biden story "certainly needs to be investigated."

"This was a conspiracy with big tech, big media, those 51 former intelligence officials and the Democrat Party. And that's what the American people now fully understand. But, yes, we will investigate this issue and a host of others, frankly," Jordan said.

"If the American people put us back in power, I think we owe it to them to get them the truth on the DOJ spying on parents, on Dr. Fauci misleading the country about where this COVID started, on the chaos on our Southern border, and, of course, this story about Hunter Biden and the Biden family profiting off of foreign interests and keeping that information from the American people."