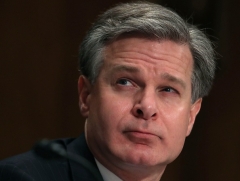 FBI Director Christopher Wray has not been forthcoming about what went on before his tenure. (Photo by Mark Wilson/AFP via Getty Images)

Newly released documents show the FBI was ready to close its investigation of Flynn on Jan. 4, 2017, after finding nothing "derogatory," but FBI counterintelligence agent Peter Strzok urged against it: “Hey, don’t close RAZOR,” Strzok wrote.

Jordan on Thursday credited Flynn's most recent attorney Sidney Powell and Attorney General Bill Barr with prying the newly disclosed documents out of the FBI:

"Why didn't (current FBI Director) Chris Wray tell us?" Jordan asked. "He's been there two-and-a-half years. He was brought in to clean up this mess."

In the summer of 2016, they opened an investigation into Trump -- into this Trump-Russia investigation. They spy on two American citizens associated with the Trump campaign.

And then on top of all that, they go after Mike Flynn after the agent said he was fine -- he hadn't done anything wrong. They go after a three-star general, that's how determined they were to get this president. And then Bob Mueller won't tell us anything after a two-year investigation?

And Chris Wray's been there for two and half years, and he won't give us any information, either. Only Bill Barr and Sidney Powell pushing is the only reason we're able to get this information.

A few hours later, Flynn's attorney Sidney Powell told Fox News's Sean Hannity that FBI Director Chris Wray used to be Andrew Weissmann's supervisor, when "Weissmann was at the Department of Justice, running roughshod over the rights of everyone in Houston," as Powell put it.

Later, Weissman was one of Special Counsel Robert Mueller's top deputies in the Trump-Russia investigation.

According to a recent biography, "Mr. Weissmann is the former Chief of the Fraud Section in the US Department of Justice (DOJ) Criminal Division, the former General Counsel of the Federal Bureau of Investigation (FBI) as well as a former lead prosecutor in the Special Counsel investigation, the Director of the Enron Task Force, and the Chief of the Criminal Division in the United States Attorney’s Office in the Eastern District of New York (EDNY)."