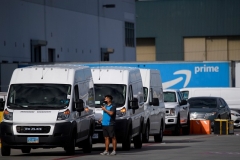 A row of Amazon delivery vans outside a distribution facility in Hawthorne, California. (Photo by PATRICK T. FALLON/AFP via Getty Images)

(CNSNews.com) - "My first thought is, the same company that's going to require you to wear a sticker to work is opposed to having people show ID to vote," Rep. Jim Jordan (R-Ohio) told Fox News on Wednesday.

He was responding to a Fox News report that Amazon will give its vaccinated employees a sticker with a green checkmark to put on their badges, showing that they are vaccinated. The written policy, sent to Fox by several Amazon employees, says, "This sticker will enable you to enter and work without wearing a face covering."

Jordan called the sticker "an attack on Americans' privacy after a year of having their First Amendment liberties assaulted."

I mean, this is -- this is the biggest point for me. Every single right we enjoy as Americans under the First Amendment has been assaulted over the last year. Your right to practice your faith. There are still congregations meeting where they can't have the full Congress -- congregation there on a Sunday morning. Your right to assemble.

Last week, Will -- last weekend I spoke to the New Mexico Republican Party in Amarillo, Texas because they couldn't assemble in New Mexico. They had to go to another state to exercise their liberty. And of course, as you and I speak, you can't go -- people watching, people viewing this can't go to their capitol to redress -- to petition their member of Congress to redress their grievances because Nancy Pelosi won't let Americans in their own capitol.

So, every single liberty, your right to freedom of the press, freedom of speech -- they've been attacked as well. And that's what this is as well. It's an attack on your freedom of speech. So, this is what's so frightening. And now for -- to invade your privacy. I'm troubled by all this. I think as many Americans are.

Jordan noted that Democrats keep insisting that Americans must follow the science, but "they are  not willing to look at the science," which shows that vaccinated people do not contract COVID in loads big enough to cause symptoms or transmit it to others -- if they contract it at all, which is unlikely.

Host Will Cain reported that Amazon also is doing weekly checks with its employees to see if they have been vaccinated: "How is this not a HIPAA violation for a company to be asking their employees their vaccination status?" Cain asked.

"Yes, I don't know," Jordan said. "It's something that we need to look at. But we also need to push back on this.

Meanwhile, Jordan is among the Republicans calling for an investigation into the Wuhan, China research facility that may have loosed the coronavirus on the world as part of its "gain-of-function" research. Gain-of-function makes viruses more lethal and transmissible with the goal of determining what harm they may eventually cause. The goal is to find treatments for anticipated mutations.

Republicans want to know if U.S. taxpayer money was involved in the Wuhan research.

"I think there's lots of questions that need answered," Jordan said. "Everything seems to be pointing in the direction the leak came from the lab."