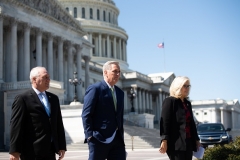 (CNSNews.com) - Rep. Jim Jordan (R-Ohio) is among the Republicans who will vote to remove Rep. Liz Cheney (R-Wyo.) from her Republican leadership position later today (Wednesday).

That is not helpful. That is the concern. And that's why three months ago, there were a number of us who wanted to make a change. That change, in fact, will happen tomorrow, Laura. And I think that's a good thing for our party.

You want our party spokesperson to be in tune with more than a single-digit percentage of the party. Ninety-some percent of the party disagree with Congresswoman Cheney. There needs to be a change. And again, I think that is going to happen tomorrow, and I think it'll be a strong vote.

Ingraham noted the effusive praise for the anti-Trump Cheney coming from CNN, MSNBC, and other left-wing media activists:

It's nothing new, Jordan said, noting that Liz Cheney has been a hero to the left ever since she voted to impeach Donald Trump for inciting insurrection:

This happened on January 13th when the Democrats went with their impeachment. I was the guy charged with managing our time on the Republican side, and all we heard was Steny Hoyer and other Democrats reciting statements that Congresswoman Cheney had made.

But it goes back even further. How about the Russian bounty story last summer, which we all knew was bogus? But what did Liz do? She tweeted out against the president that very day. Why not just pick up the phone, call the White House and ask them, is there any truth to this story? They would have been glad to tell her, happy to tell her that there was nothing to it. And we now know there was nothing to it.

So this has been a pattern, and I think, frankly now, there's just enough of our conference who have said we've got to make a change, and it's going to happen tomorrow morning.

As for concerns that Stefanik has a less conservative voting record than Cheney does, Jordan brushed that aside:

"Look, Elise Stefanik is a good communicator. You saw her in action during the first impeachment and how she handled that, I thought very well. She has been endorsed by President Trump. She is supported by the minority leader. She's supported by Whip Scalise. She's got an A-plus with the NRA, and she was endorsed by the Susan B. Anthony List. I think that is pretty good," Jordan said.

"But the main focus here is, can you communicate the consistent Republican message that our party believes in? That's the qualifications for this job. I think tomorrow we are going to make a change. Liz Cheney won't be there. I think some time later in this week, Miss Stefanik will win that position. I think that's how it's going to play out, and I think overall that is a very good thing for our party."

Also See:
Rep. Liz Cheney: 'I Am a Conservative Republican...We Must Speak the Truth'