Rep. Jim Jordan: Why Do Democrats' Lawyers Get to Find and Hand Over Documents? 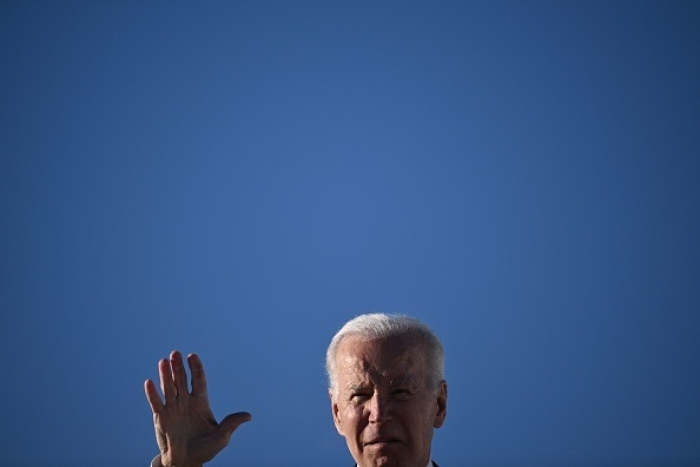 President Joe Biden boards Air Force One at the Delaware Air National Guard Base in New Castle, Delaware, on January 15, 2023, on his way to Atlanta, Georgia. (Photo by BRENDAN SMIALOWSKI/AFP via Getty Images)

(CNSNews.com) - The Biden administration has not been transparent about the discovery of classified documents in Joe Biden's possession, said Rep. Jim Jordan (R-Ohio), chairman of the House Judiciary Committee, on Sunday.

And why, Jordan asked, are Biden's personal attorneys -- who do not have active security clearance -- allowed to do the searching?

"When the White House goes public and tells us about it, the only thing they talk about are the -- are the first batch, the ones found at the Penn Biden Center.

“They don't tell us about the second batch that were found in the garage, in the adjacent room, even though they knew about it at the time. So, they can say they're being transparent, but it's anything but.

"And then, of course, there's the obvious thing that so many people have talked about. It's this -- it's this double standard. It's -- Clinton mishandles classified information, they get certain -- Biden mishandled classified information, they get treated a certain way. And then, of course, President Trump gets his -- gets his home raided 91 days before this midterm election.

"I think those are the two things that stand out. And, by the way, why is it always the left, the Democrats, they get to decide, they get to go find the information and hand it over to the government?

"I still remember, during the Benghazi hearings, I asked Secretary Clinton about the 60-some-thousand e-mails she had. I said, Madam Secretary, we don't need to see the personal ones. We don't want that. This is America. This thing called privacy is really important. We don't need to see that. But we don't exactly trust you and your lawyers to hand over to the committee what the American people are entitled to see.

"Why don't you let us do it this way? How about a neutral third party, like a retired federal judge? How about we have them evaluate it and hand over the documents? And, of course, they said no. They said, we will decide, and we will destroy 30-some-thousand e-mails, which is exactly what they did.

"So there's always this double standard. And, frankly, that's why we have created this select committee to look into some of this disparate treatment we see in the way the Justice Department operates."

He also said Biden's personal attorneys have "followed a process" for reviewing documents in Biden's possession, as follows:

"The President’s personal attorneys conducting the searches do not have active security clearance, so if they identified a document with a classified marking, they stopped and did not review it, and suspended any further search in that box, file or other specific space where the document was found, as appropriate," Sauber said:

"Since the DOJ made contact with the President’s personal attorneys, the next step in the process was to notify DOJ and to arrange for DOJ to take possession of the document.

"Because I have a security clearance, I went to Wilmington Thursday evening to facilitate providing the document the Presidents’ personal counsel found on Wednesday to the Justice Department. While I was transferring it to the DOJ officials who accompanied me, five additional pages with classification markings were discovered among the material with it, for a total of six pages. The DOJ officials with me immediately took possession of them.”

So the five additional pages were found on January 12, the same day Attorney General Merrick Garland announced the appointment of a special counsel. But we didn't hear about the additional five pages until Saturday, January 14.

Sauber said the White House Counsel’s Office will no longer comment on the documents, but will “refer specific questions to the Special Counsel’s office moving forward.”