Rep. Jim Jordan: January 6 Committee 'Is All About Getting President Trump' 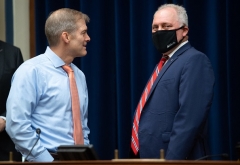 "This is all about getting Trump," Jordan told Fox News's Laura Ingraham:

Remember, they tried to get him before he got elected in 2016; they spent four years while he was in office trying to get rid of him; and now, after he's left office, they're trying to make sure he doesn't run again."

Jordan pointed to a Feb. 5 "New York Times" report that said the January 6 committee has hired two former U.S. attorneys and more than a dozen other former federal prosecutors.

The House select committee scrutinizing the Jan. 6 assault on the Capitol is borrowing techniques from federal prosecutions, employing aggressive tactics typically used against mobsters and terrorists as it seeks to break through stonewalling from former President Donald J. Trump and his allies and develop evidence that could prompt a criminal case.

In what its members see as the best opportunity to hold Mr. Trump and his team accountable, the committee — which has no authority to pursue criminal charges — is using what powers it has in expansive ways in hopes of pressuring Attorney General Merrick B. Garland to use the Justice Department to investigate and prosecute them.

Jordan called the report "amazing, because it said 14 former prosecutors are part of this committee.

Now, if your whole focus is a legislative purpose, as it's supposed to be under our Constitution, do you really need 14 former prosecutors to figure out what you might do or might not do with the Electoral Count Act or whatever?

It's really about making sure this town doesn't have someone like President Trump come back and disrupt the cozy relationship, the establishment...the elite have here in Washington, D.C.

The Republican National Committee recently censured the only two Republicans on the January 6 committee -- Liz Cheney and Adam Kinzinger, both of them outspoken anti-Trumpers.