Rep. Jeffries: House Push for Gender-Neutral Language Is About Being 'As Inclusive As Possible' 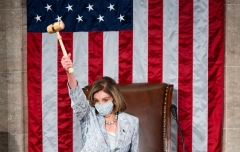 Speaker of the House Nancy Pelosi (D-Calif.) was re-elected to continue in that role in the 117th Congress on Sunday, Jan. 3, 2021. (Photo by BILL CLARK/POOL/AFP via Getty Images)

(CNSNews.com) - Under new rules proposed by the House Rules Committee last week, the 117th Congress will honor "all gender identities," among other efforts to promote “diversity.”

Guest host Bret Baier noted that critics might say the adoption of gender neutral language by Congress was "not the message from the election." Baier asked Jeffries if Democrats are "too focused on political correctness, and that this is an example of that."

"This is just an example of making sure that we are as inclusive as possible," Jeffries replied.

You know, the framers of the Constitution envisioned the House at the institution that was the closest to the people, and in their words, that would reflect the passions of the American people. It's the reason why we have two-year terms as opposed to four years of the presidency, six years in the Senate, life tenure for the Supreme Court.

And so I think that the rules should reflect our values as an institution that is the most inclusive as possible, that reflects the gorgeous mosaic in every possible way of the American people.

The proposed rule change, to be voted on today (Monday), comes under the heading of honoring all gender identities, and reads as follows:

"Changes pronouns and familial relationships in the House rules to be gender neutral or removes references to gender, as appropriate, to ensure we are inclusive of all Members, Delegates, Resident Commissioners and their families -- including those who are nonbinary."

As one example, the office of the Omsbudsman would be changed to the gender-neutral office of "Ombuds."

Other gender-neutral nouns include “sibling,” “parent,” and “Member of Congress” or “they” rather than he or she.

Another proposed rules change would increase "witness diversity" in committee hearings by requiring the Office of Diversity and Inclusion "to develop a system, which the House will implement, to ensure that the House tracks the diversity of witnesses as a next step in the effort to increase witness diversity."

In his interview with Baier, Jeffries described his party as "a very big family," "a diverse family," and "an enthusiastic family."

"We believe in the House that our charge is to reflect the hopes, the dreams, the aspirations, the passions of the American people that's consistent with the United States Constitution. And Speaker Pelosi understands that a big-tent approach to getting things done on behalf of the American people is incredibly important."

Amazingly, Jeffries told Baier that Democrats – who impeached the president and opposed him at almost every turn -- have "worked closely” with Donald Trump on some issues.

We've worked closely with President Trump on issues like criminal justice reform, with the passage of the historic First Step Act.

And so we're always going to govern, not in a partisan way, but in a practical way that gets things done on behalf of the American people."

Baier asked Jeffries about a new rule that, in Baier’s words, would expand the subpoena and investigative powers of House Democrats.

Jeffries didn't give a direct answer, except to say, "I wouldn't interpret any change in rules as an effort to look backward with respect to Donald Trump's presidency.

“When we felt it was the right thing to do, consistent with our constitutional responsibilities to hold this president accountable, we took that step. But as we move forward, I think our concern is going to be focused on kitchen table, pocketbook issues, dealing with the health care challenges of the American people, making sure that we can bring good paying jobs, prosperity in every single zip code I think should be our guiding principle.

"And, of course, working closely with Joe Biden and Kamala Harris to build back better for the people."

The rule change regarding subpoenas would allow Congress "to continue investigations into urgent issues without interruption by authorizing critical subpoenas on the Census and coronavirus response to be reissued before committees organize."