Rep. Gaetz: 'I'd Be Concerned About Giving Joe Biden a Code to My Garage Door Opener' 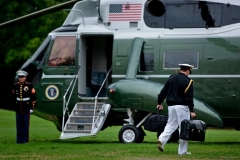 A military aide carries a suitcase with nuclear codes while accompanying then-President Barack Obama on a trip to Asia in 2016. (Photo by BRENDAN SMIALOWSKI/AFP via Getty Images)

(CNSNews.com) - Calls by Democrats to remove the president's sole authority to order a nuclear attack are generating resistance from some Republicans.

As Fox News reported this week:

“Nearly three dozen House Democrats on Monday called on Biden to relinquish his sole authority to launch nuclear weapons, in the latest appeal to reform the command-and-control structure so that no single person can initiate a nuclear war."

The Democrats want the vice president and House speaker to concur on a nuclear launch order.

But this is about more than just one man. It is about the presidency. It is about doctrine of peace through strength that we talk a lot about on this program.

And I oppose this letter because I do believe that no matter who the president is, they have to be vested in the authority to be commander-in- chief, to take care of the country, even if it is Joe Biden during nap time.

Gaetz said if President Joe Biden is "not in a position to really make decisions day in and day out...I think we all ought to listen." He noted that cognitive decline "can happen exponentially and it is something that the country needs to be out on the lookout for."

Hannity noted, "You know, as much as they hated Donald Trump, they didn't propose this" when he was president.

Vesting one person with this authority entails real risks. Past presidents have threatened to attack other countries with nuclear weapons or exhibited behavior that caused other officials to express concern about the president’s judgment.

While any president would presumably consult with advisors before ordering a nuclear attack, there is no requirement to do so,” the letter adds. “The military is obligated to carry out the order if they assess it is legal under the laws of war. Under the current posture of U.S. nuclear forces, that attack would happen in minutes.