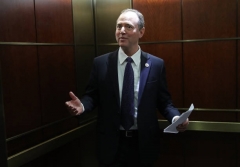 (CNSNews.com) - As Democrats fume over canceled in-person intelligence briefings on election interference, Republicans say it's the right move -- and one applauded by the intelligence community.

"I would not trust Adam Schiff with the secret ingredient to my mother's lasagna recipe, much less our nation's most sensitive intelligence," Rep. Matt Gaetz (R-Fla.) told Fox News's Sean Hannity Monday night.

Gaetz was reacting to the announcement on Saturday by Director of National Intelligence John Ratcliffe, who said intelligence officials would no longer brief Congress about foreign election interference in person, to minimize leaks. Ratcliffe said the intelligence commuity would provide written briefings instead.

"But this dispute is not really about intelligence, it's about politics," Gaetz said.

You see, Democrats want to use these briefings as a platform to try to scare the American people about Russia, when we know the real threat that we face is from China, And the Democrats know that Joe Biden has a big China problem.

If we're going to rebuild this economy after coronavirus, we need a president who's willing to confront China, that's what Donald Trump has done, and if you're just a regular American wondering how all this affects you -- you know, the Democrats are saying Russia is the biggest threat, the Republicans are saying China's the biggest threat. Go look around your home, how many products that are made in Russia? Not too many, but a whole lot are made in China.

And so this is all about making sure you keep the establishment in power through Joe Biden to bolster the phony threat of Russia and diminish the very real threat that China poses.

"I had a conversation with John Ratcliff, and I just have to say congratulations to Ratcliffe, he's really doing a fantastic job. And I think that this latest move is evidence of that," Grenell said:

We are still able to give all of the information to politicians on threats. They will get everything that they always have gotten, they should be well prepared. The difference, Sean, is that this move -- by putting it in writing -- will hopefully minimize the leaks. We have a real crisis with leaks.

Speaking to MSNBC Monday night, Rep. Adam Schiff (D-Calif.) made the case that if Trump wins the election, the credit will go to Russia:

Obviously something changed, Lawrence (O'Donnell), from their commitments to do these periodic hearings to make sure that Congress, but more importantly, the country, was informed about Russia's effort to help re-elect Donald Trump.

Well, let's just put it in its perspective. In the national security act of 1947, states very clearly that the intelligence community must fully and currently brief Congress on intelligence matters. So they are flying in the face of a law which established all of this procedure.

We said shockingly, but it is hard to be shocked anymore at the abuse of power of this administration, now isn't it? It's very clear that the president wants, invites, appreciates Russia's involvement in our election, which is not lawful, which is not lawful.

But we do also protect our elections. We don't want Vladimir Putin deciding who the next president is. We want the American people to decide that. The president thinks otherwise.