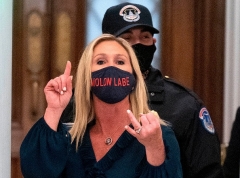 (CNSNews.com) - As Democrats in Congress and the media go all-out to make freshman Rep. Marjorie Taylor Greene (R-Ga.) the face of the Republican Party, today they'll go beyond demonizing her (and her fellow Republicans) by stripping Greene of her House committee assignments.

Greene, who has espoused or endorsed a number of crackpot theories, nevertheless says 13,000 "America First Patriots" have raised $175,000 in the last 48 hours "to defend my seat in Congress."

"The people have my back," she tweeted on Wednesday.

Even Republicans who object to Greene's remarks say her congressional service should be up to the voters in her district -- not to Democrats:

"Tomorrow, they (Democrats) are going to take the unprecedented action of substituting the will of Washington for the will of people in this country," Rep. Matt Gaetz (R-Fla.) told Fox News's Sean Hannity Wednesday night. "And when we get the majority back, we better apply the same standard."

Rep. Andy Biggs (R-Ariz.) told Hannity that Democrats have the votes to remove Green from the Education & Labor Committee and the Budget Committee:

"But we are still in the minority,” Biggs continued. “But we've got to get the majority back in order to be able to apply this. But I tell you what, we've got to -- we have to keep talking about this, because it is so disparate, this treatment here, and what Nancy Pelosi has done to try to arrogate power to the center. That is a huge problem now. And this is just one more step in that.”

With Thursday’s vote, House Democrats want to get Republican lawmakers on record as supporting Greene by voting not to strip her of her committee assignments. It’s always about the next political campaign, in other words.

Rep. Ted Lieu is among the Democrats – and there are many of them – who is using Greene to paint all Republicans as wacky conspiracy theorists: "Marjorie Taylor Greene has become the voice and face of the House @GOP Caucus," Lieu tweeted on Wednesday.

Rep. Gaetz agrees that Greene "said some crazy conspiracy things before she was elected to Congress."

But, he noted, "Adam Schiff, Eric Swalwell, Jerry Nadler, and most of the Democrats said crazy conspiracy theory things when they were in Congress, impeaching President Trump and attempting to delegitimize his time in office as a consequence of the Russia hoax.

“Marjorie Taylor Greene got 75-percent of the vote," Gaetz said. "That's more than almost every member of Congress. So it is a dangerous precedent when we disrespect the voters, and that is really what the left is trying to do.

"They are saying the people of America don't matter. It's the decision-making process inside the Beltway," Gaetz continued.

“So tonight, the Republicans decided to keep Liz Cheney (as GOP Caucus chair). Tomorrow, the Democrats will boot Marjorie Taylor Greene from her committees. I think both decisions reinforce the power of Washington, and it only encourages me to try and go out in America and get people focused on the changes we need to make in both parties so that the voters are respected.”