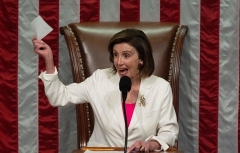 (CNSNews.com) - Aside from the cost and inflationary pressures of the Build Back Better bill, the Democrats' "transformative" legislation, as they call it, will extend the the reach of the federal government and enable the biggest expansion of welfare our country has seen in decades, Rep. Virginia Foxx (R-N.C.) said after the bill passed the House, 220-213.

“This bill will also extend the federal government’s reach into education. Allowing a federal takeover of child care will drive smaller and faith-based daycares out of business, make infant care more expensive, and give Washington bureaucrats even more say in what your children learn," Fox said.

Among many other provisions, the bill establishes programs to provide free child care for children under the age of six and free universal preschool services for toddlers.

As recent school board meetings in this country demonstrate, parents are concerned, upset and furious about the propaganda their children are being taught.

President Biden’s so-called Build Back Better bill is a travesty. This power grab simultaneously over burdens hardworking taxpayers and worsens our country’s inflation crisis -- putting the American Dream further out of reach for many Americans.

Democrats are out of their minds if they expect Americans to believe Speaker Pelosi and President Biden’s outrageous claim that this bill won’t add a dollar to the deficit or Senate Majority Leader Chuck Schumer’s claim that spending $1.75 trillion will ‘fight inflation.’ This is hogwash! We know that this bill will likely cost far more than Democrats estimate and that it will exacerbate inflation. The American people have more business sense than this -- they can’t be fooled.

This bill will also extend the federal government’s reach into education. Allowing a federal takeover of child care will drive smaller and faith-based daycares out of business, make infant care more expensive, and give Washington bureaucrats even more say in what your children learn.

This bill leaves workers in the dust while empowering union bosses and government bureaucrats. To make matters worse it also hamstrings business owners with dangerous PRO Act provisions and outrageous and malicious government-imposed fines. It’s clear this bill isn’t about helping hardworking Americans, it's about bolstering the left’s special interests.

As a self-governing nation, we should be helping Americans become self-sufficient, not become dependent on government programs. Yet this bill does just the opposite. The average American wants less government intervention, not more.

As usual when the left tries to 'build back better' they start by tearing down the most important parts of our nation -- our freedom and independence. We must fight back. My vote was an unequivocal no.