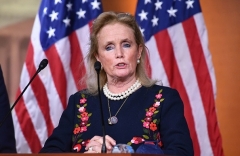 She was asked for her reaction to the insult lobbed by Republican Rep. Lauren Boebert at Democrat Rep. Ilhan Omar -- an insult for which Boebert later apologized (but not to Omar’s satisfaction).

"What you just described is in the halls of Congress, which is the heart of democracy," Dingell said:

But we have scenes like that playing out across the country. This country is being divided by fear and hatred and violence, and we need to all take a deep breath. We can disagree with each other. We can do it respectfully.

But we need to respect each and every individual person for, whoever they are, from wherever they came from, whatever their religion is.

And I just would like everybody in this country to take a deep, collective breath, and start to think about the hateful things we are beginning to accept as okay.

Dingell said she's had people show up outside her house "with assault weapons." And she noted that her "young staff" is answering phone calls to her office that are full of "hate."

"We were just taught that you don't act this way," Dingell said, adding that her staffers and those in other offices "are scared."

"This has to stop. It is simply not okay," Dingell said, noting that the hatred and threats may be deterring good people from running for office:

They don't want to put people that they love or care for at risk. And we can't let that happen. We need people of all kinds of backgrounds. That's what the House of Representatives is. It's a representative body of this country who want to serve.

Public service is good, and it's only as good as the people that are willing to run and fight and be part of -- to fight for our freedom, to protect our democracy, protect our Constitution, but do it in a civil, respectful, dignified way.

'I was reading Gandhi last night'

"We need to respect everybody, and I mean everybody," Dingell said:

And I think we've got to find a way. I really am focused on this collective, deep breath. This tit for tat, tit for tat, it is, you know -- I was reading Gandhi last night. I was upset about some things.

And you know, an eye for an eye leaves everybody blind. We've got to start to figure out how we're going to tone down, collectively, this anger, this vitriol in this country.

One of the things that has upset Dingell is the break-in at her district office on Monday:

"None of my technology was taken," she said. "They had taken some paddles, patriotic paddles that had been given to me, taking it, and damaged memorabilia of my husband. So police said it was obviously personal.

“I'm not going to say that it didn't bother me, but I have removed all the important memorabilia, things that have sentimental or historical value to me, from the office, and I'm going right back out today and doing my job."

Dingell tweeted about the break-in as well as her "just try a little kindness" message, as follows: