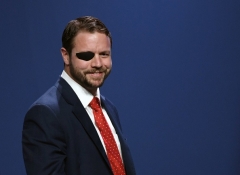 (CNSNews.com) - The U.S. Senate will reconvene on May 4, "and thank God we have them doing that," Rep. Dan Crenshaw (R-Texas) told Fox & Friends Thursday morning. "The House needs to do the same. This is cowardly to the core. I honestly can't even believe it. This is such a lack of leadership."

House Speaker Nancy Pelosi and Majority Leader Steny Hoyer (D-Md.) announced on Tuesday that they would heed the advice of the House physician and keep members away from the Washington, where the number of diagnosed coronavirus cases is growing.

"We've made a judgment that we will not come back next week, but that we hope to come back very soon," Hoyer said. But he assured Americans that lawmakers are working "very, very hard at home."

Cowardice is the only way to describe that. This is more than just about accountability. Let me remind, everybody, if we got paid hourly in Congress, you bet Nancy Pelosi would be there.

Listen, people are having real problems, but people are trying. They're fighting on the front lines, they're risk-mitigating, they're being smart but they're still engaging in life. Why can't Congress do the same?

It's about leadership -- it's about demonstrating to the American people that we're not scared and spineless. And just for once I wish we would actually demonstrate that.

There's no problem going in and debating. Okay, you can exert the same kind of risk mitigation measures that everybody else across America is doing and yet Nancy Pelosi refuses to do that.

The Senate is going back to work and thank God we have them doing that. The House needs to do the same. This is cowardly to the core. I can honestly can't even believe it. This is such a lack of leadership.

Crenshaw noted that the only way to stimulate the economy is to "get money flowing through it again."

The Texas Republican called the phased-in reopening of his home state "smart," and he said many other places can "follow suit," even if hard-hit New York City cannot:

We can do this as a people, and we have to do this. Because there's a real human cost to those job numbers. There's a health care cost to those numbers. OK, procedures aren't being done, lives are being lost, livelihoods are being destroyed, there's mental health issues associated with that, there's a loss of human dignity that's occurring when you lose your livelihood, and we cannot ignore that anymore.

The Labor Department announced on Thursday that first-time claims for unemployment insurance now exceed 30 million over the last 6 weeks.