Rep. Clyburn: Confirming Barrett Would Be 'Throwback to Plessy vs. Ferguson and Even Dred Scott." 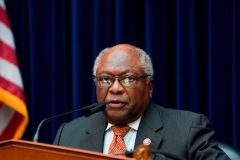 (CNSNews.com) - Rep. James Clyburn (D-S.C.), an early and influential Joe Biden supporter, told CNN on Wednesday that he thinks Republicans will be packing the Supreme Court simply by putting Judge Amy Coney Barrett on the bench.

On the question of adding additional justices -- a question Joe Biden has refused to answer -- Clyburn indicated he'd be okay with that:

"Absolutely, I do believe that," Clyburn continued:

I have said before, and I believe very strongly that the Shelby V. Holder decision that got rid of the Voting Rights Act was the worst decision of the Supreme Court since Dred Scott.

I said that, I believe that very strongly, because I know what the vote does for people of color. And I know what happened here in South Carolina and other states immediately after that decision when all of these onerous things were done to people's voting rights.

Harlow did not press Clyburn on how South Carolinians' votes are being massively suppressed.

In 1896, the U.S. Supreme Court in Plessy v. Ferguson upheld the constitutionality of racial segregation under the “separate but equal” doctrine.

Years before that, in 1857, the Court ruled that black people "are not included, and were not intended to be included, under the word 'citizens' in the Constitution, and can therefore claim none of the rights and privileges which that instrument provides for and secures to citizens of the United States."

In 2013, the Supreme Court essentially invalidated a "preclearance" requirement in the 1965 Voting Rights Act that forced some states to get permission from the federal government before making changes to their voting laws. The court ruled that the formula determining which jurisdictions are subject to preclearance was outdated and therefore unconstitutional.

Clyburn is a cosponsor of the Democrats' HEROES Act, which is now the subject of negotiations that seem to be going nowhere. The bill includes the following voting provisions:

-- Require states and jurisdictions to allow at least 15 days of early voting in Federal elections;

-- Ensure that every voter can access no-excuse absentee voting by mail;

-- Allow voters to register to vote and cast their ballots on the same day.