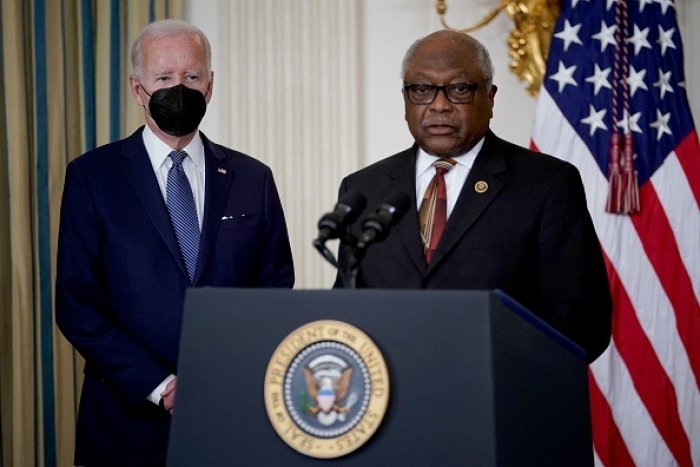 President Joe Biden stands with House Majority Whip James Clyburn (D-S.C.) at a signing ceremony for the Inflation Reduction Act of 2022 on August 16, 2022. (Photo by MANDEL NGAN/AFP via Getty Images)

The House Majority Whip was asked to respond to recent mass shootings in this country, including one at a Chesapeake, Virginia Walmart and another at a gay nightclub in Colorado Springs.

Host Margaret Brennan noted that some of the killers had legally purchased their weapons: "What does that tell you about the efficacy of the federal law?" she asked.

"It tells me all I need to know," Clyburn responded:

"And that is, just because it's legal does not make it the right thing. I tell people all the time, the institution of slavery was legal, but it was not right. Just because they purchased these weapons legally does not mean that's what the law ought to be.

"We need to change these laws. Unfortunately, I'm going to be here in my district on Wednesday speaking at the funeral service of one of those young football players from the University of Virginia who died at the hands of the weapon that was, from all indications, legally purchased.

"That's not the problem. Chesapeake, Virginia, that gun was purchased legally the morning of the event. We have to visit these laws and do what's necessary to keep these guns out of the hands of people who should not have them. And that is what we need to do in this lame-duck session, and in a bipartisan way.

"Let's protect the American people from demented people and make sure that we put some safety and security in people's -- when they're shopping, when they're sitting in churches."

Clyburn admitted there's not much likelihood of getting 60 Senate votes to pass an "assault" weapons ban in the next few weeks.

"It's 50/50 in the Senate. And that is a problem for us. We need to sit down in a bipartisan way and say, look, what can we do to protect the public? Nobody wants to take anybody's guns away. Your Second Amendment is there to protect everybody. But so is the First Amendment. But it's not unfettered. It's very clear."

Clyburn said the filibuster, the 60-vote threshold needed to pass most legislation in the Senate, "is causing us problems."

Aside from a gun ban, Clyburn said priorities for the lame-duck session are keeping the government funded with another continuing resolution; passing the John R. Lewis Voting Rights Act, and passing thee Electoral Count Reform Act.

"Yes, keep the government open, but let's also keep fundamental rights protected. And that, to me, would be one and two, and these gun safety laws would be closely thereafter."